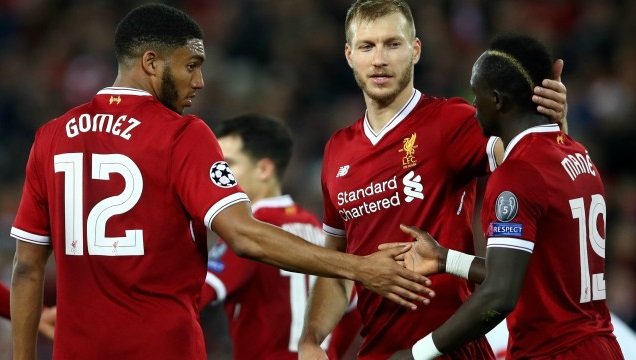 Hot on the heels of thrashing Spartak Moscow to secure top spot in their Champions League group, Liverpool are set to play host to neighbors Everton on Sunday in the 229th Merseyside Derby.

The Toffees, who were prematurely knocked out of the Europa League on the back of a stuttering start to the campaign, have been on the up as of late with Sam Allardyce taking over at Goodison Park on a permanent basis. Back to winning ways and scoring goals again, the Blues go in to the meeting with their cross-town rivals as massive underdogs, but that doesn’t mean anyone at Anfield will be taking the occasion lightly.

“I think they will probably be fired up and motivated. We have our threats but it is key we are not over-confident and we have to stay composed and be aware of their threats,” explained Reds defender Joe Gomez. “I think we have seen some teams come to Anfield and sit off but I think with the derby I don’t think they’ll come too defensive-minded as they will be fired up and want to attack us,” added the Englishman, well aware of the enormity of the occasion. “We are always focused on defensive aspects of the game and will approach the game the same way we do any, just try to defend and take our chances. A lot of our clean sheets have come at home and that is a positive for us.”

If Everton are going to take something from this, they’re going to have to score goals — a feat that could made simpler should the knock Reds fullback Alberto Moreno took in the meeting with Spartak keep him sidelined on Sunday. While their defense remains their very well known Achilles heel, the Toffees will also have to keep their hosts at bay — a feat that few have been able to accomplish this season.

Banging them in for fun, Liverpool have scored a staggering 16-goals in their last five Premier League matches. Throw the Champions League in there and that number bumps up by ten.

“I’m very happy to play alongside all these great players. I’m enjoying playing with them, they make it easier for me so I’m happy,” enthused Reds winger Sadio Mane, full of praise for his teammates. “Without them we are nothing so it’s about everybody. We played fantastic football and we deserved to win because we created many chances and scored without conceding,” added the Senegalese attacker, who scored in both meetings with the Toffees last season. “It’s an important game for us. We play at home and the fans deserve a win so we’ll do our best to get it.”