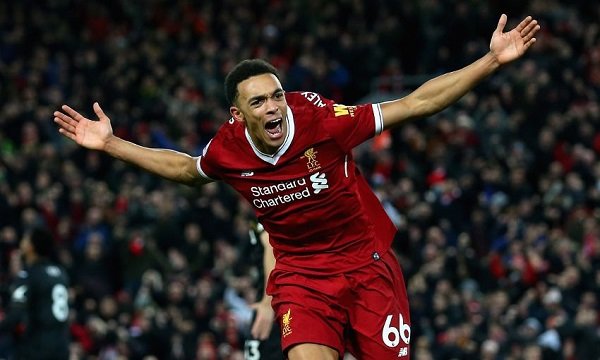 We all know that Trent Alexander-Arnold has en eye for goal, but the absolute beauty the 19-year old bagged in the 5-0 win over Swansea City on Boxing Day was a bit special with the Liverpool born 19-year old fulfilling a lifelong dream to score in front of the Kop.

“Every lad dreams of scoring at the Kop end under the floodlights, and especially with it coming off the bar and going in!,” enthused the youngster. “They can easily bounce back and that would have been a disappointment, but it [went] in and it was a dream come true. To be able to get the chance and to put it away for the team was really good and the result made it [more] special,” added the Scouse defender. “I know a lot of the family [were] here and it would have been a really proud moment for them to see the goal go in.”

It wasn’t a goal you’d expect from a fullback; Andrew Robertson’s whipped cross was headed away by Jacks defender Alfie Mawson, but the visitors weren’t quick enough to clear and they were punished for it as Alexander-Arnold nipped in front of Jordan Ayew before rifling home.

To be fair, the match was more or less done and dusted by that point. Philippe Coutinho opened the scoring after only six minutes and Roberto Firmino would add some insurance early in the second half before the floodgates opened with the Brazilian doubling down and both Alexander-Arnold and Alex Oxlade-Chamberlain — who believes he could have done much better — getting in on the action.

“We won, we got the three points. Personally, I was a bit disappointed with myself,” the former Arsenal midfielder told Sky Sports. “I’m happy I managed to get the goal in the end; I tried to work hard throughout the 90 minutes. When the chance came at the end, I was happy to put that away and it made it a bit better,” continued Chambo. “I just want more out of myself and there were a few moments when I could have done better with my end product,” added the Englishman. “There were some great goals – what a goal Trent’s was. He worked really hard to create that opportunity and I think my goal was quite similar, in the way it was rebounding around and I managed to finish it at the end.