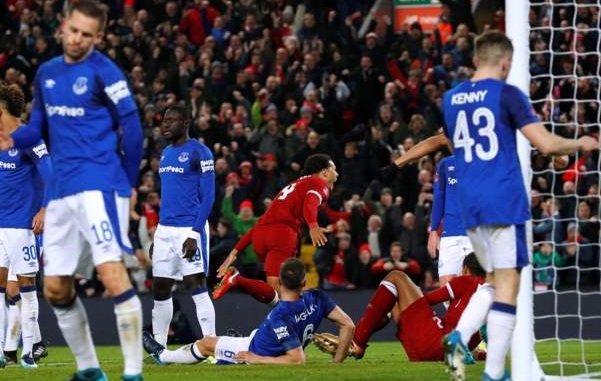 It’s the kind of debut that always gets discussed and very rarely comes to fruition, but after a week of speculation over whether or not he’d start Liverpool’s FA Cup third round meeting with Everton, Reds new boy Virgil van Dijk lived the dream as the big defender scored a late winner in front of the Kop.

There’s been two meetings and two soft penalties on the hop between these cross-town rivals, but Jurgen Klopp’s side was on the receiving end this time as Mason Holgate’s foolish decision to wrap his arms around around Adam Lallana in the box ended with James Milner potting the opener from the spot. Holding a slender lead and wasteful in front of goal, this one continued to play out as a repeat of their last encounter, but it was the Blues section that was given something to celebrate when Gylfi Sigurdsson finished a sweeping second half counter-attack that left Loris Karius rooted to his line.

I suppose it was wishful thinking more than anything else, but as chants of “The City’s All Ours” drifted across from the away end, the Toffee’s contingent were proven wrong yet again when Jordan Pickford misjudged Alex Oxlade-Chamberlain’s corner and van Dijk rose highest to nod home the winner six-minutes from time.

“It was a big fight, it was not brilliant football, it was not the most beauty – it was how cup games should be,” stressed Liverpool boss Jurgen Klopp, speaking to the club’s official website. “It is not about who is the better side, who can do this or that. Things like this can happen sometimes, but it is pretty rare,” added the German manager, giving rather concise assessment. “Today, we had to really work a lot and that’s all we were asking for before the game – we said we needed to be ready for the hardest work because we want to go to the next round and everyone needs to see that.”

Without the likes of Philippe Coutinho, who continues to be linked with a move to Barcelona, and newly crowned CAF Player of the Year Mohamed Salah, the Reds struggled to find the attacking swagger that has typified this side over the past couple of weeks. The visitors, for their part, looked less like the shrinking violets that eeked out a draw here last month and more like a team that came to play football, but they remained overly cautious with mitigating the threat posed by the Reds at the forefront of Sam Allardyce’s plan.

As cagey as it was at times, it was your typical Merseyside Derby — a crunching tackle from Wayne Rooney got things going, a contentious call lead to Lallana winning a penalty, tempers flared when Holgate and Roberto Firmino came close to blows after the former needlessly pushed the latter into some advertising hoardings and just when the Toffees thought they’d get something we took it away.

Sounds about right, right? In to the fourth round at the expense of the Ev and our record signing scoring the winner? Life is good when you’re a Red.