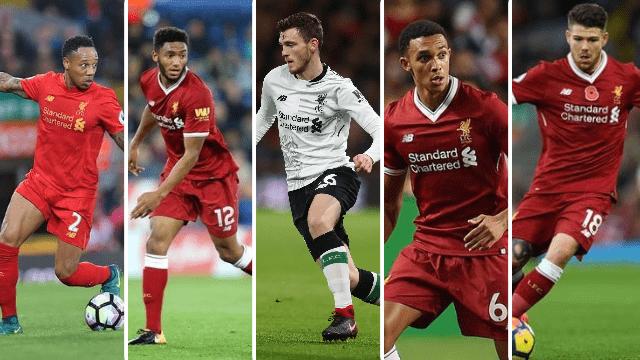 Liverpool, in recent years have not been as, shall we say, blessed with quality full-backs. With the likes of Martin Kelly, Glen Johnson, Philipp Degen, Jose Enrique, Andrea Dossena, Emiliano Insua & Paul Konchesky having featured for the Reds in the past 10 years. Not to say that we have never had a solid full-back ever. With John Arne Riise, Alvaro Arbaloa, Steve Finnan, for me, were the most consistent full-backs over the past 10-12 years in a Reds shirt.

Are we now seeing a new era of quality full-backs at Anfield?

Since former Liverpool boss, Brendan Rodgers, signed Alberto Moreno from Sevilla back in the summer of 2015, the Spaniard has been hit & miss. Superb overlapping down the left flank providing width and dynamism to the attack. However, quite the opposite, providing a lack of security when defending and a real liability when needing to defend in crucial moments. It looked almost certain that Alberto’s career with the Reds was all but over when Jurgen Klopp put in James Milner in at left-back, being a preferred choice for Klopp for the entirety of the last campaign. There seemed no way back for Moreno, especially with the arrival of Scottish full-back Andrew Robertson back in the summer window. However, the out of favour Spanish full-back has resurrected his Anfield career this campaign with a string of solid performances. All was looking well for Alby, but for picking up an injury back in December during a 7-0 victory against Spartak Moscow.

When Klopp signed the former Hull City left-back, the intentions were for the 23-year-old to be the first choice ahead of Moreno, though that was not the case, well…until now.

Having featured 10 times in the Premier League and twice in domestic cup competitions, once in the FA Cup and the Carabao Cup, Robertson has since become a fan favourite, practically with myself. The first statement made from the Scotsman was during the 2-1 victory against Everton in the 3rd round of the FA Cup at Anfield. Considering the occasion, a Merseyside Derby in the FA Cup at Anfield, it was one of the most SCOUSE performances that I have seen. He matched the passion of he likes of Steven Gerrard and Jamie Carragher in a game of this significance. A truly, unexpected, but mesmerizing display from Robertson. Again, just 9 days on from securing a spot in the 4th round of the FA Cup, Robertson was back at it with another sublime display in front of the Anfield faithful. This time, Champions elect and so called invincibles Manchester City were up. Once again, Andy Robertson had shown us that passion and what it means to were the famous Red shirt. The defining moment were Robertson closed down 5 City players starting from the left side of the halfway line to the right side of the Man City 18 yard box. 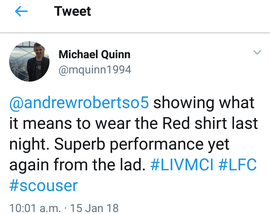 While Moreno and Robertson have been performing consistently at a top level throughout the campaign, it is equally the case on the right hand side of the defence in both Joe Gomez and Trent Alexander-Arnold. Since the arrival of Jurgen Klopp, the German has invested his time in the Liverpool youth set-up with Trent Alexander-Arnold breaking into the first team from time to time and impressing under Klopp.

With first choice right-back Nathaniel Clyne side-lined since the beginning of the season, Klopp has had to put his trust in 2 young and inexperienced full-backs, one of which being Alexander-Arnold. The 19-year-old has proven to be quite the modern day full-back this season showing great athleticism and exceptional work rate. The young Englishman has played 15 games in all competitions for the Reds scoring 3 goals and is looking likely that he will be our first choice right-back for years to come.

Not only is it the young Scouser that has impressed thus far in the season, another youngster Joe Gomez has been a key figurehead in the Liverpool defence. Despite the odd mistake from the 20-year-old, it can’t be forgotten that Gomez is not even a right-back, but is in fact a centre-back, though we have not been given that impression of late. Like Trent, young Joe has the attributes of the modern day full-back, despite his bulkier stature, he is remarkably quick and not afraid to go beyond the oppositions full-back. Gomez has featured 24 times this season and has not put a foot wrong apart from a couple of similar mistakes, which will be cut out with experience. It is frightening the way the Englishman is so composed in tight spaces and able to play the ball out. I would love to see Gomez get a run of games playing in the centre of defence as he has all the right attributes to do it well.

So Liverpool are really looking good for full-backs at this moment in time, considering last campaign and seasons before were we have never looked comfortable in these positions. I do believe that the full-backs we have now are the best we have had in a long time. Do you agree?