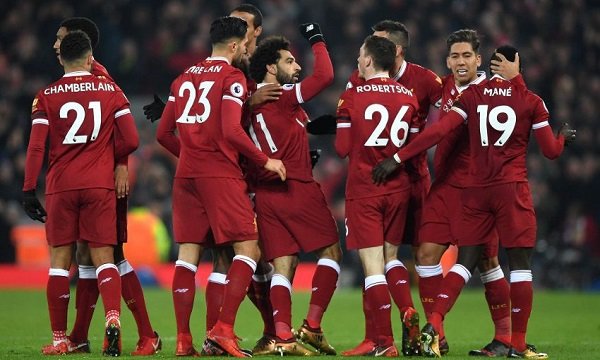 Leapfrogging Chelsea in to third place, Liverpool produced a performance overflowing with all the attacking verve and defensive folly you’ve come to expect from Jurgen Klopp’s boys with a seven goal thriller at Anfield ending with Manchester City’s match towards a season unbeaten halted on Merseyside.

Alex Oxlade-Chamberlain opened the scoring just under 10-minutes in as the midfielder’s bullish run ended with a low drive that beat City ‘keeper Ederson for pace. City aren’t a team that are easily rattled and the visitors responded in kind as Leroy Sane took advantage of a innocuous cross-field ball wrong-footing Joe Gomez before beating Loris Karius at his near post.

They may have been even going in to the break, but after the restart the Reds high press began to produce cracks in the Citizens otherwise eternal composure and in a blistering eight minute spell the hosts would find the net three times. Roberto Firmino restored the lead with a sublime finish and Mohamed Salah would set-up Sadio Mane for the third before taking advantage of Ederson’s misplaced pass to lash home a picture perfect long range effort.

You’d think a three-goal lead would be enough to see them through, but Ilkay Gundogan and Sergio Aguero’s neat one-two ended with Bernardo Silva sweeping home and then the former Borussia Dortmund midfielder would add one of his own when Dejan Lovren — handed the armband for the day — failed to deal with a chip in to the area from the Argentine.

Aguero, who has yet to either score or win at Anfield, almost grabbed a late equalizer, but his injury time header could only find the side netting as the Kop breathed a collective sigh of relief before exploding in to celebration.

“You can watch it as a manager or as a football fan and I prefer to do that – wow! What a game! Two teams, full throttle,” enthused Liverpool boss Jurgen Klopp. “We played, I don’t know which level, caused them problems like hell. I was not scared at the end, not that I didn’t think we could concede a fourth, I have known my boys long enough now, it was so intense,” continued the Reds manager, knowing full well how close City came to clawing back a point. “If you combine quality with attitude you see a game like this. I really loved it. You will find someone who wants to talk about defending, no clean sheet, but he can blow up my boots.”

It really was a full team performance — the tireless work rate of Georginio Wijnaldum things ticking over nicely, Andrew Robertson keeping Raheem Sterling quiet arguably amounted to a Man of the Match worthy outing for the Scotsman and both Emre Can and Joel Matip impressed as the league leaders failed to gain control.

While they deserve almost all of the fawning praise lavished on them, Pep Guardiola’s side aren’t quite the all conquering juggernauts they’re made out to be and despite spending big money on defensive recruits, they remain suspect on the back-foot. Oxlade-Chamberlain skipped past the usually reliable Fernandinho en-route to opening the scoring, Firmino out muscled John Stones for the Reds second and the unrelenting pressure from the hosts forced Nicolas Otamendi and Ederson in to individual errors for the third and fourth.

And, as City’s impressive winning run came to a crashing end, our unbeaten streak stretched to 18-matches on the hop. This team is nothing if not exciting; sometimes it’s for all the wrong reasons and one day it’ll likely be the death of me, but it sure beats parking the bus and praying for a point.