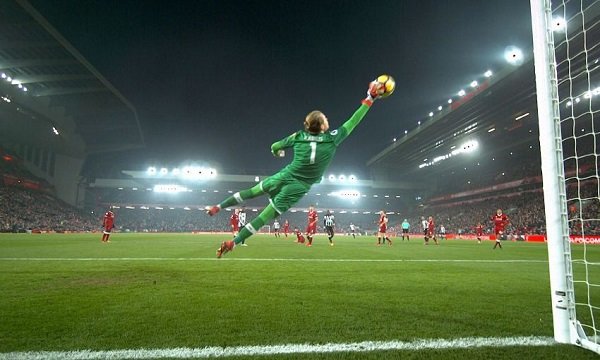 If nothing else former Liverpool boss Rafa Benitez knows how to set up his side to frustrate, but even the master tactician couldn’t stop a Reds side in full flow as Newcastle United were swept aside at Anfield.

Pinned in to their own half, the Magpies were under constant threat throughout what was a wasteful first half for the Merseysiders, but persistence paid off as Alex Oxlade-Chamberlain’s neat pass found Mohamed Salah breaking in to the area and the Egyptian made no mistake with just Newcastle ‘keeper Martin Dubravka to beat.

In to break in the lead, Liverpool came out the other side and doubled their numbers right quick with Sadio Mane once again finding the back of the net. The Senegalese attacker has come out of his funk at the perfect time of the season and once again proved why he such a vital part of the this team, sweeping home Roberto Firmino’s clever pass to bag the eventual winner — and the Reds 200th goal under Jurgen Klopp.

“I very often forget the result during the game so even though we were 2-0 up I did feel we had to control the game better,” explained the German manager, speaking to the press following the final whistle. “But then when you step out on the pitch, you realise the wind, so it was difficult to do the right thing in the right moment. We scored two wonderful goals and for sure should have had a penalty but didn’t,” added the gaffer, going knowing that the scoreline was deserved, but hard fought. “They defended really well and are a good team with quality.”

As much as I’m trying to avoid sounding too cocksure, the result really wasn’t in question. Without a recognized striker in the starting eleven and only Dwight Gayle up front, Benitez was sorely lacking in options and his game-plan reflected that from the off — though, if Loris Karius wasn’t equal to Mohamed Diame’s spectacular curling effort at the end of the first half, I might be taking a different tone altogether.

The German, who has at times looked entirely unsure what he’s supposed to be doing between those two sticks, has come in to his own over the last month and a half and with some regular game time under his belt has started to not only settle in to life in the starting eleven, but actually look like he should be there. The same can be said for Oxalde-Chamberlain; the jury is still out on the Arsenal man, but he’s starting to come in to his own under Klopp with his work rate and tenacity the center of everything that’s good about his game.

And, really, there’s no time like the present; we host FC Porto on Tuesday and take a trip to Old Trafford on Saturday in what’s going to be yet another big week. Back in second place, we can stay there if Manchester United drop points to Crystal Palace on Monday and can overtake our bitters rivals if we eek out a result at theirs next weekend. Either way, we’re throwing our weight around at the top of table — is there a better place to be at this stage of the campaign?