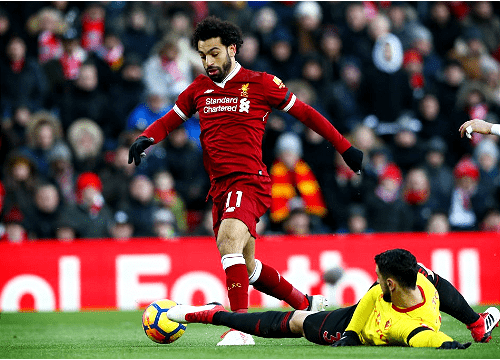 Following on from the disappointment at Old Trafford last Saturday afternoon as Liverpool lost to fierce rivals down the East Lancs Manchester United. The Reds were back in action yesterday evening, this time against mid table Watford at Anfield.

It was a Baltic day on Merseyside with a persistent snow fall thanks to the return of the ‘Beast from the East’, but it was Liverpool who were on fire, keeping those cold chills away for the Reds who attended the game and making some cash for those that used a Bets promo code to have a flutter before the match.

With Klopp’s side dropping down to fourth in the League after last weekend’s 2-1 defeat, it was crucial that Liverpool secured all three points, particularly with United (2nd) and Tottenham (3rd) both featuring in the FA Cup this weekend, the Reds had the chance to move above Spurs into third and two-points behind Jose Mourinho’s bus in second.

It took Liverpool only 5-minutes to bag the first goal of the afternoon and none other than the ‘Egyptian King’ himself with the goal, twisting the Hornets defence inside and out, proving a common feature throughout, and sending Miguel Britos to the floor drilling the ball with his right foot underneath the Watford goalkeeper for his first of the day.

Not only was Mo Salah scoring the goals, but he was also creating chances. After an evenly matched thirty minutes following the first goal, it was a typical Liverpool counter-attack with Salah breaking away down the left-hand side, putting through a perfectly weighted pass for Bobby Firmino who’s excellent touch gave him space to get his shot away, only to be denied by Watford stopper Karnezis, what would have been a superb breakaway goal.

On 42-minutes, Salah secured his second from the six-yard-box following an outstanding delivery from Andy Robertson, who put in another quality performance at left-back. Jurgen Klopp’s side in full control at 2-0 as the first-half concluded.

Going into the second-half, the snow was still coming down but with little effect on the Liverpool players as they continued were they left off. Within 4 minutes of the restart, again, Salah being the creator and once more leaving Britos on the floor for a second time, kept the ball in play at the by-line on the right-hand side of the box, with time to come in side on his favoured left foot, crossed with pace for the oncoming Firmino who’s clever flick guided the ball into the far side of the goal to make it 3-0.

With two goals and an assist to his name, the Egyptian was by no means finished.

Watford did not cause any major threat to the Reds defence but there was a little scare when the Hornets playmaker Roberto Pereyra whipped in a free-kick hitting the crossbar and going out of play. With the game comfortably in Liverpool’s hands, the Reds continued to create chances, most notably when Joe Gomez swung in a cross which Firmino failed to take full advantage of. On 77-minutes, Sadio Mane played the ball to Salah, and with a box full of Watford players, showed great composure to twist & turn and for a third time, sent not one but two Watford players to the floor to secure the 25-year-olds first hat-trick for the Reds.

4-0 up, Klopp introduced Danny Ings into the game, which was a delight to see the Englishman get more game time after several unfortunate long-term injuries and very well could and should have scored two goals himself. After a tame effort by Ings on the 85th minute, the ball somehow found its way to who else but Mo Salah who smashed the ball into the roof of the net to get his fourth goal of the game, his 28th in the League and his 36th in all competitions, making it a record number of goals scored in a debut season for Liverpool.

An outstanding display from Liverpool at Anfield yesterday, but there is only one thing that we have to all talk about first, and that is Mo Salah. Every game is built up so much on the anticipation and expectation that we are going to witness another masterclass form ‘the Egyptian King’. If you are familiar with the Billy Joel song, Salah really is ‘the Entertainer’ and thee entertainer within this Liverpool side and in my opinion, the whole of the league.

What is frightening, being that he is only 25-years-old and his best years are still ahead of him. With Liverpool gaining a reputation in recent years of letting our star players leave the club is something of a worry amongst most fans, if Salah will be poached by a Real Madrid or a Barcelona.

When I see this man play for our team, I see him like I seen Fernando Torres. A team that makes him feel like he is the main man, well that’s because he is. I do not feel that with the way we are playing at this time with the level of players around him that he would even consider leaving.

With regards to what this result means to the league, Liverpool now sit comfortably in third despite having played a game more than Spurs (4th) & Chelsea (5th). Champions League football for next season is almost secured with 7 games remaining.