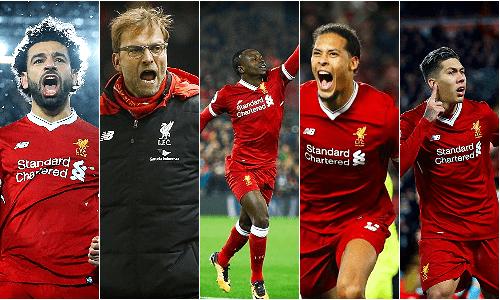 So, it’s that time again, the dreaded international break where there is another round of pointless international fixtures. It has probably come at the worst possible time for Liverpool. Despite coming off the back of reaching the quarter-finals of the Champions League and a 5-0 thumping of Watford at Anfield, Jurgen Klopp’s internationals jet off around the world when momentum is high.

With Liverpool’s next fixture against Crystal Palace on Saturday 31st March at Anfield, it is still quite hard to not think about the quarter-final tie against Pep Guardiola’s Manchester City on Wednesday 4th April.

As I can’t hide my excitement and anticipation for the fixture, there is no better time to discuss the fixture & why the two-legged tie suits Liverpool more so than Manchester City.

Sadio Mane, Roberto Firmino & Mo Salah, quite possibly the best attacking three in the world in current form. Bold statement? I don’t think so! Liverpool’s front three are the first reason why Manchester City will be quaking in their boots when the Citizens take on the Reds at Anfield a week Wednesday.
The aforementioned have a combined goal tally of 73 in all competitions, comparing to Man City’s front three of Raheem Sterling (20), Sergio Aguero (30) & Leroy Sane (12) with 62 goals in all competitions.

Mo Salah – ‘The Egyptian King’ has been nothing short of world class in his first season on Merseyside. The Premier League’s top goal scorer, with 28 goals and 36 in all competitions, scored his first Liverpool hat-trick last weekend and showing just how much of a threat he is in front of goal, added a fourth to his name against the Hornets. The Manchester City defence will no doubt be dreading facing Salah yet again, particularly after his showing against the blue half of Manchester back in January with the 25-year-old scoring one and also assisting Sadio Mane in a 4-3 spectacle at Anfield.

Sadio Mane & Roberto Firmino – In terms of goals scored, it has not been the most prolific from the Senegalese comparing to Salah, yet still impressive. We have seen Sadio Mane excel in other aspects of his game this year. With the limelight on Mo Salah, we have to consider the part that Mane has played besides goals scored. Creatively, the 25-year-old has impressed with 8 assists adding to his 14 goals in all competitions. His directness and ability to ease past players will be a cause for concern for Guardiola. Similarly, Roberto Firmino has to be treated as big of a threat as Mane and Salah. Quite possibly the best player in his position, he can’t go unmissed by Guardiola and is often the reason to the success of our attacking play.

There aren’t many better ways to start your Liverpool career off than the way 75-million-pound Dutch defender did. With an FA Cup Merseyside Derby at 1-1 heading into the final few minutes, Virgil Van Dijk popped up to score the winner at the Kop end on his debut, kick-starting his Anfield career following the switch from Southampton.

Since the now Holland captain arrived in January, he has already proven his hefty price tag with the 26-year-old to yet put in a poor performance. Van Dijk has featured 10-times for the Reds and has settled in remarkably, showing his defensive leadership and stability we had all hoped for.

The Dutchman will prove vital in the tie against City and could be the reason why and if Liverpool are to reach the semi-finals. The 26-year-old has some pretty impressive stats to back up his performances at Liverpool but one that really stands out is his defensive errors. The Dutch giant has not put one foot wrong for the Reds and has displayed extreme composure and leadership at the back. These attributes were certainly missed in the league clash in January against City where Liverpool’s 3 goal lead was quickly cancelled out to just one. In that game, Van Dijk was ruled out due to a slight injury and with no question, would have assured a 4-1 victory rather than the 4-3 win. I have no doubt that Virgil Van Dijk can sustain the pressure from what has been a terrific and at times frightening outfit this season, as it shows with Guardiola’s side racing away with the league title.

“At Anfield, even experienced players can have a bad start…Pushed by their fans, the Liverpool players seemed unstoppable” – Fabio Capello

The crowd and the team are as one together. The crowd lifts the team in any situation and that is fantastic” – Manuel Almunia

This list really does go on and on describing the Anfield atmosphere and the effects it has on the Liverpool players and the opposition players. It really is unrivalled when it is at its best – and come April 4th, we will show again why Liverpool fans produce one of the best atmospheres in world football. Unfortunately for Manchester City, it will come at their disposal.

In the past week, through the almighty power of social media, Reds supporters have promoted, what has become a tradition in recent years, a pre-match team bus greeting on the Anfield Road, much to the displeasure of everybody associated with Manchester City.

The first time that I have personally witnessed this breath-taking and intimidating atmosphere was prior to the clash against Sunderland back in March 2014 during the run-in of the Premier League season in which the Reds put in title challenge, losing out to non-other than our Champions League opponents Man City. Not only did it occur during the 13/14 season, 2-years later the tradition continued when Jurgen Klopp’s former side Borussia Dortmund came to Anfield for what proved to be a thrilling Europa League Quarter-final second leg tie. The Anfield faithful returned again to greet the team coach on their way to the Europa League Final when Liverpool overcame Villarreal on the way to Basel.

Though Nothing has been confirmed, it is certain that thousands will gather the streets of Anfield Road despite the humorous reports surrounding the ‘hostile’ and ‘potentially illegal’ reception, as reported by Manchester Evening News.

One thing is for certain which is, there will now be double the amount of Reds supporters who will be there to greet the Mighty Reds and scare the City players yet again. We have seen it in the past and once more, the world will see why our fans really can lead our team to victory.

4. Record Against English teams in Europe

In fixtures like these, form really does go out of the window. It can’t be treated as any typical Premier League clash when it comes down to domestic rivals battling it out in a European knockout competition. We have seen our fair share of these games in the past decade or so, most notably against Chelsea.

But how does our record look when up against other Premier League teams in Europe since the turn of the millennium?

Liverpool have played English teams in the knockout stage in European competitions 6 times only being eliminated twice, both by Chelsea (07/08) & (08/09). Liverpool have prevailed in 4 of those ties, twice against Chelsea (04/05) & (06/07), in both reaching the Champions League Final. The other two, Arsenal (06/07) & Manchester United most recently (15/16). This is another reason why the tie against City favours Liverpool more so.

The final reason as to why the Quarter-final draw suits Jurgen Klopp’s side is for the man himself. I’ll keep it brief, well because there is nothing much that I can say about the German but purely that he is boss.

During his first interview as Reds manager, the 50-year-old had stated that, “We have to change from doubters to believers”. From then on, it has been a work in-progress, but I am convinced that this is the start of a successful period in the history of this club and will present this period on the April 4th.