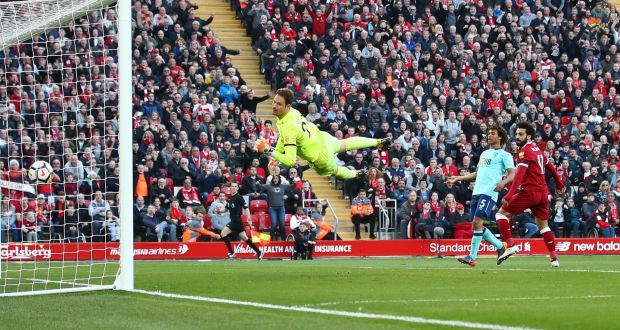 Liverpool’s terrifying trio were on fire against Bournemouth and it was absolutely brilliant to watch, such a professional performance on a particularly emotional weekend.

Mo Salah scored his 40th goal for Liverpool this weekend. How mental is that? FORTY. Salah is truly an exceptional footballer. Did you know he’s already scored more goals in one season than Didier Drogba managed in his entire career?

Liverpool have also now scored 300 goals under Jurgen Klopp — the squad is just leaking goals at the minute, and for those wondering, Salah has scored 13% of the goals we’ve seen under Klopp.

Only two more wins are now required for the Reds to secure a top-four finish. It’s not really a worry at the minute, to be honest, it’s more of an inevitability — similar to Man City and the Premier League title.

Klopp has reiterated how happy he is with Salah at the minute. He said: “When you saw him playing in Rome there was this last question around him: if you don’t play in England, you can’t say yes because it is more physical.

“But there was a moment when we said: ‘Yes, he is kind of smart and he doesn’t need to look like a bodybuilder.'”

In a similar vein to what Klopp’s said, I’d like to add how impressive it was to see Mo score a looping header over 6’6″ Asmir Begovic — he just can’t stop scoring goals and he isn’t a one-trick pony.

Yes, this match reaction has turned into me just waxing lyrical about Mo but that’s not fair.

His teammates have been impeccable; Sadio Mane and Bobby Firmino have been amazing this season — both have now broken the records set by the former highest-scoring Brazilian and Senegalese players (in one season). Incredible.

Let’s also not forget the performances put in from the rest of the squad to keep a clean sheet, Loris Karius and Virgil van Dijk have made an immeasurable difference since the turn of the new year.

It’ll be one of Klopp’s biggest tasks to ensure all three of the Reds’ attacking triangle remain happy at Anfield, something he seems to be doing a good job at, and we will see a lot of success during his reign.