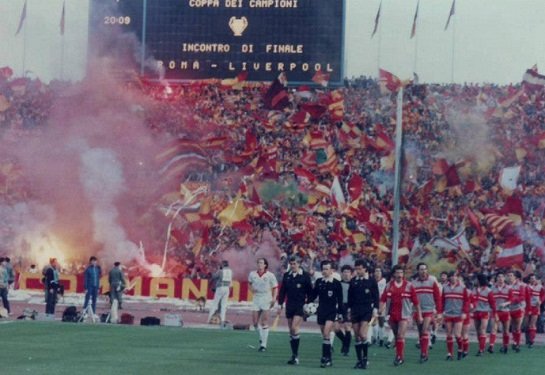 Level after extra time, a shootout decided the 1984 European Cup final between Liverpool and AS Roma with the famous “wobbly legs” of Reds ‘keeper Bruce Grobbelaar going down in history — or infamy, depending on which end of the Stadio Olympico you were sitting in — as the Anfield outfit lifted the famous trophy for the fourth time.

That, of course, was the Giallorossi’s only appearance in UEFA’s showpiece event; now, after drawing Liverpool in the semi-finals of the Champions League, 34-years later they’re hoping for some measure of revenge as they eye a spot in the final for the first time in over three decades.

This is the furthest the Romans have been in the competition since it was re-branded in 1992. Having navigated the Group stages with relative ease, Eusebio Di Francesco’s side were given a scare in the Round of 16 when they snuck through on away goals against Ukrainian side Shakhtar Donetsk and they looked almost certain to be shown the door when Barcelona bagged four goals in the first leg of their quarter-final showdown in Catalonia, but an away goal from Eden Dzeko made all the difference as they put three past their heavily favoured visitors to earn their place in the semi-finals.

It takes a bit of luck to win this competition and though the bookies haven’t shifted their position as outsiders, there’s something about the Italians that have kept the odds relatively in check with the latest offerings from Coral putting them at 8/1 to finally lift the trophy.

Most neutrals would believe that the bookmakers have gone too long on Roma, but Liverpool will give them a stern test. You can check out this list of best new free bets from top UK bookmakers if you are backing the Reds, or anyone else, in the Champions League.

One has to wonder if revenge comes in to their calculations?

“I have yet to talk to my team about Liverpool, we have three very important matches,” admitted Di Francesco, speaking to the press ahead of Derby della Capitale where they faced off with bitter cross-town rivals Lazio on Sunday. “Our fans have been waiting for this game for 34 years,” added the Italian, knowing full well what winning this tie will mean for the Serie A side. “We look forward to it, we face a strong team, it won’t be easy, we’re very happy to be able to play it.”

Often billed as one of the hottest fixtures of the season, the derby failed to bring the kind of fireworks one would expect and after running out a scoreless 90-minutes, they’re level on points after a wholly frustrating evening in the Eternal City. Di Francesco’s side were lacking the kind of drive that saw them power past Barcelona.

Qualifying for next season’s Champions League is always the main objective, but regardless of what happens in Serie A, the pressure is off of Roma; no one gave them a chance of making it this far in this competition and if they were to crash out at the final hurdle, it’d still be seen as a massive accomplishment for the Italian side. Then again, Liverpool weren’t supposed to make it past Manchester City in the quarter-finals either and we put five past the freshly crowned Premier League champions. The Gilarossi may have revenge on the mind, but we’ve got a sixth European cup to win.

Redemption for the Romans will have to wait for another day…