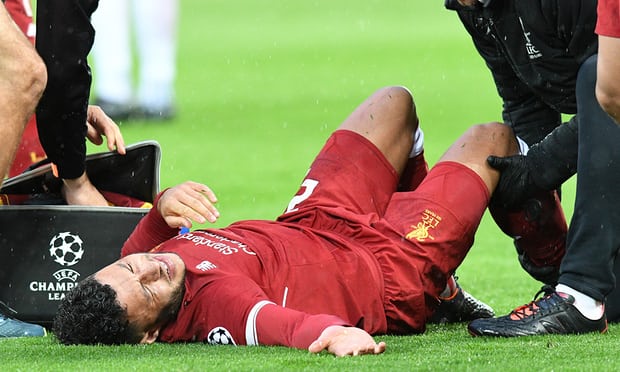 Taking some of the shine off of what was a glorious night at Anfield, news has filtered through today that Liverpool midfielder Alex Oxlade-Chamberlain is set to miss the remainder of the season after suffering knee ligament damage during the 5-2 win over AS Roma at Anfield on Tuesday night.

The 24-year old was straight in to the visitors from the off, but a heavy challenge on Giallarossi fullback Aleksandar Kolarov ended with him being stretchered off the pitch.

“The extent of the injury means Oxlade-Chamberlain is set to miss the remainder of the campaign for Liverpool, as well as the World Cup in Russia with England,” said a statement on Liverpool’s official website, confirming our worst suspicions. “Oxlade-Chamberlain will now begin a rehabilitation programme to enable him to reach full fitness again as soon as possible, returning to action next season.”

The 24-year old, who arrived on Merseyside from Premier League rivals Arsenal during what was a busy summer for Reds boss Jurgen Klopp, has been revitalized under the German’s all-action system and has been particularly impressive during Liverpool’s run to the semi-finals of the Champions League. A thunderbolt of a goal against Manchester City in the last eight will be a highlight for him, but it’s his work-rate in their high intensity pressing system — and his bond with the club’s supporters — that has turned both heads and opinions.

This, unfortunately, comes at a terrible time for Klopp, leaving the gaffer with only three fit midfielders. Emre Can, who is almost certainly leaving this summer, is still sidelined with a back injury and is not expected to return anytime soon. Adam Lallana, who has suffered throughout the campaign with a number of niggly problems, is in a similar position and though the club hasn’t given up hope of him making it back from a hamstring problem to play again before the close of the campaign, his match fitness won’t be anywhere close to where it needs to be in order to truly make an impact.