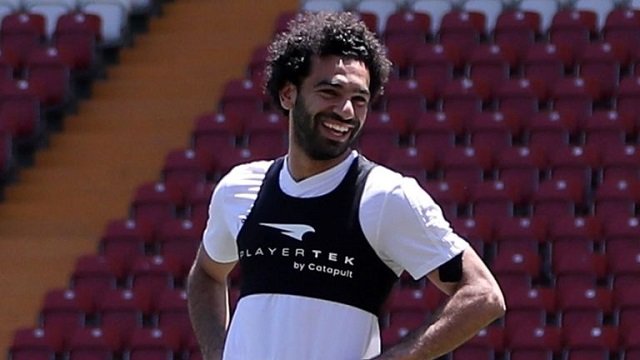 Although it remains highly unlikely that Liverpool attacker Mohamed Salah will be fit in time for Egypt’s first match of the World Cup, the 25-year old is doing absolutely everything he can to play a part in the tournament and has rejoined the Pharaohs in training ahead of their meeting with Uruguay on Friday.

Having picked up a shoulder injury in the first-half of the Reds loss to Real Madrid in last months Champions League final, his participation in FIFA’s showcase event was thrown in to question, but the Egyptian is back on the pitch and getting better every day.

“He is much better now, but up till this point, we did not decide if he will be taking part in the first match or not,” said Pharaohs boss Ihab Leheta, speaking to the press ahead of their tournament opener. “We did not make a decision about this yet but we’re following up his progress closely,” continued the manager. “Salah took part in today’s training session like yesterday but he engaged more in today’s session,” explained Leheta. “His final status has not been decided yet and of course I can’t talk about details regarding his training with the team.”

While Liverpool supporters around the world will be over the moon to see Salah back in action, they’ll be hoping above all that he makes it back to Merseyside in one piece — especially with the likes of Alex Oxlade-Chamberlain sidelined for the long term.

The Englishman, who was stretchered off during the Reds Champions League semi-final win over AS Roma at Anfield, was initially expected to be ready to hit the pitch by the time pre-season rolled around, but following surgery on his knee, he’s not expected to be back until the fall.

“He was taking on more responsibility, having shots at goal, getting on the scoresheet and making goals. You could see there was a smile on his face and he was starting to enjoy his football,” said Liverpool legend Gary McAllister when asked about Chambo’s injury. “He’ll come back mentally stronger,” stressed the assistant manager of Rangers. “He’ll be prepared and his body will be fine. It’s just convincing himself that there is a way back and it’s not the end of the world.”