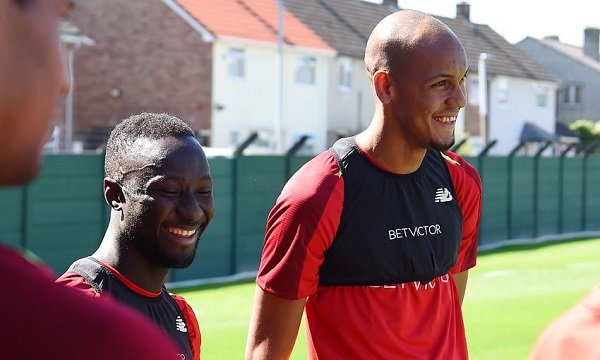 Having officially completed his move from Ligue One side AS Monaco on the first of July, new Liverpool midfielder Fabinho is readying putting in the hours at Melwood with the Brazilian getting back in to the swing of things ahead of the Merseysiders extensive pre-season schedule.

The perfect replacement — and some would argue upgrade — for newly minted Juventus man Emre Can, the 24-year will add some bite to a Reds midfield that has been accused of being a bit soft. Strength in depth has always been a problem for the Anfield outfit, but they’re making moves this summer that could set them on course to challenge for the Premier League title and in turn get the punters checking the Sportnation review for bonus codes to earn a few extra quid along the way. Set to play alongside another new recruit in former RB Leipzig engine Naby Keita, Fabinho struck a similar tone to the Guinean when asked about his decision to hook up with Jurgen Klopp’s side.

“Yes, [it was] very easy. I was sad to leave Monaco, a club that gave me a lot of great moments, but in football sometimes you need new challenges and I thought it was time to move on,” explained the Brazilian, speaking with FourFourTwo magazine. “As soon as Liverpool declared their interest in signing me, it was a simple decision to make. A club with Liverpool’s history wants you? Come on, you just pack your bags and go,” enthused Fabinho. “It will be an honour to wear the famous red shirt.”

A deep lying midfielder that doesn’t shy away from a tackle, the ex-Monaco midfielder has made the move to the Champions League runners-up despite interest from a number of top European sides — including Liverpool’s bitter rivals Manchester United. While it’s typically a showdown reserved for the most important days on the fixture list, Fabinho will get a small taste of what the Northwest Derby means to both sets of supporters when these two sides square off in the International Champions Cup this summer.

The Reds pre-season tour of the United States will also see them take on German giants Borussia Dortmund as well as reigning Premier League champions Manchester City, but it’s the meeting with Jose Mourinho’s side at the Michigan Stadium at the tail end of July that’s really got fans excited. There’s absolutely no way that a what amounts to a glorified training session will match the intensity of a meeting between these age old adversaries, but that doesn’t mean there won’t be the ever present edge to proceedings. And, in that vein, Fabinho has already put the boot in.

“I was never close to signing for Manchester United, no,” stressed the 24-year old when asked about interest from Old Trafford. “I heard things said about it, but the truth is it was never a strong possibility,” continued the Brazilian. “I won’t deny there were a few conversations about my situation with Monaco, but there was never an official offer from United.”