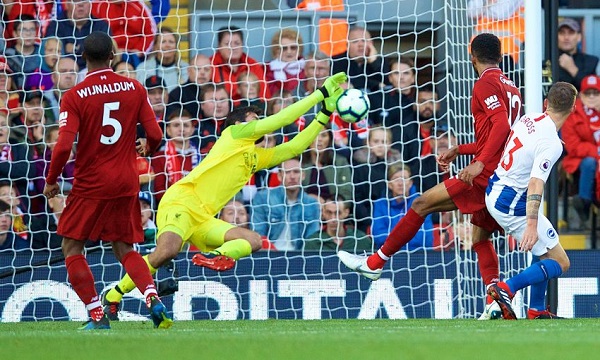 Top of the league heading in to Saturday’s meeting with Leicester City, Liverpool will be looking to keep their spot at the peak as we head in to the first International Break of the campaign. Unbeaten in their first three matches and yet to concede a goal, the Reds are ticking over nicely with a new found solidity at the back helping them win matches that last season they would have drawn.

That, of course, hasn’t been lost on the bookies and sites that offer tips and bonuses like udatcha have followed suit. While the back-line kept things relatively tight away to Crystal Palace and at home to Brighton and Hove Albion, we’ve still had rely on our last line of defense in new ‘keeper Alisson Becker with the Brazilian making crucial saves in both matches to ensure we came away with all three points. The former AS Roma man hasn’t missed a beat since he traded the Italian capital for the North West of England with Jurgen Klopp’s familiar brand of football helping him to feel right at home.

“I have fitted perfectly in the team and in the team’s style of play. [Liverpool] like [the goalkeeper] to participate in the offensive phase and in shaping the game from the back,” explained the Brazilian. “It has similar characteristics to the [Brazil national team],” mused the 25-year old. “In Rome I was already trying to help in shaping the game but the style was a little bit different to what we do at Liverpool.”

At this point last year we’d already shipped three goals and dropped points away to Watford before going on to be unceremoniously taken apart by Manchester City at the Etihad Stadium in our fourth outing of the season. A 4-1 thrashing at the hands of Tottenham Hotspur would follow the next month, but things tightened up considerably once van Dijk’s protracted move from Southampton was completed at the turn of the year.

That, of course, has given Liverpool’s already potent attack a stronger base from which to operate. The crux of their Klopp’s plans continues to be scoring goals and Alisson’s ability to comfortably play the ball out from the back and his inch perfect delivery have given the Reds a whole new outlet for the attacking trio of Roberto Firmino, Sadio Mane and Mohamed Salah.

“Sometimes it can be a nightmare,” said van Dijk when asked what it was like to come up against them in training. “I knew it before I joined. I knew already what I could face,” continued the Dutch international. “But to see how they really are in training and the games I’ve played together with them, it’s just unbelievable,” enthused the experienced defender. “It’s not only the goals but the hunger to defend and score goals as well. It’s fantastic.”