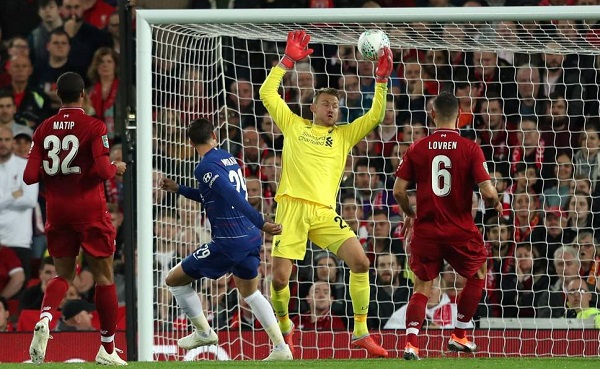 Leading through an acrobatic effort from Daniel Sturridge going in to the final ten-minutes of their first of two meetings with Chelsea this week, Liverpool came unstuck right when it mattered most as a scrambled effort from Emerson Palmieri restored parity before a highlight of the night worthy strike from Eden Hazard sent the Reds crashing out of the League Cup.

It was a shadow side playing shadow football; gone was the intense, high pressing that Jurgen Klopp’s team have become known for and in it’s place came something far more subdued than the German’s favoured “heavy metal” tactics. That shift from top gear to idle isn’t one you’ll see on Saturday when these two go at it again and the same punters who came out on top midweek will be looking for new betting sites and updated odds to have another kick at the can. The Merseysiders may have stumbled, but they created more than enough chances to have finished off a Blues side that — predictably — was also chalk full of changes.

“I think we didn’t deserve to go out of the competition,” said Liverpool ‘keeper Simon Mignolet, who made his first appearance this season. “We had enough chances to win the game and go forward, but unfortunately, we lost it in the end and we go out of a competition we wanted to win,” added the Belgian, admitting that opportunities will be few and far between for him and many others this season. “There’s a lot of competition for places and cup competitions like this are chances for us to play, but we have to accept it and move forward. The only thing we can do is try to push the 11 who are starting on Saturday to make sure they do their jobs.”

Despite insisting that he wasn’t prioritizing one competition over another, Klopp made eight changes to the starting eleven that ran out comfortable winners over Southampton at the weekend with AS Monaco transplant Fabinho, Nathaniel Clyne and Alberto Moreno joining Mignolet in making their first starts of the campaign.

Although they actually did quite well, the rust definitely showed in the early going as Chelsea dominated play through the impressive Cesc Fàbregas, but the Reds upped their tempo after the break and were in the ascendancy when Sturridge scored the go-ahead goal against his former side — an opportunity he’s unlikely to get when they square up again on Saturday.

“Let me say it like this: hopefully they don’t have to. It was very intense,” mused Liverpool boss Jurgen Klopp when asked if any of of the players he brought in would keep their places at the weekend. “A few of the players who were not involved tonight are not 100 per cent fit, so we will see what we do,” added the gaffer, hinting that a more familiar side would run out at Stamford Bridge. “But it would be cool if we could make these changes again because not playing for a long time and then playing these 95, 96, 97 minutes and then playing three days later again would, of course, not be pure joy.”