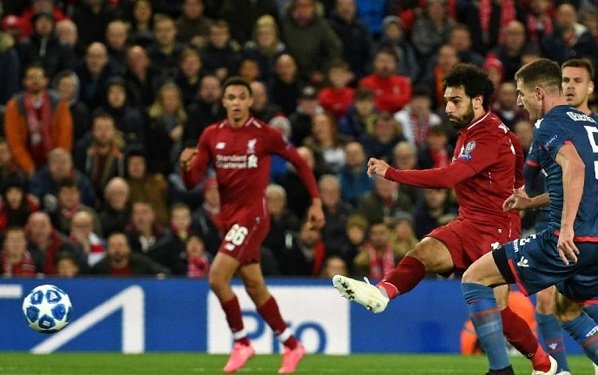 Sailing past Red Star Belgrade on the back of four unanswered goals, Liverpool took firm control of Champions League Group C going in to the business end of the group stages following a thrilling draw between Paris Saint-Germain and Napoli at the Parc des Princes.

After initially stifling their efforts, each of the Reds front-three would find their way on to the score-sheet as excellent strikes from Roberto Firmino and Sadio Mane sandwiched a Mohamed Salah double that took the Egyptian to a staggering 50-goals in only 65-appearances for the Anfield outfit — the fastest a Liverpool player has ever hit that milestone.

“That’s great. I’m happy to score 50 goals for Liverpool. I’m very proud about that and I hope to keep scoring to help the team win games,” said the Egyptian with his trademark smile, speaking to BT Sports following the final whistle. “I think we knew how to play with each other,” mused Salah when asked about his relationship with his fellow forwards. “The way we play is always different, the style, the system is always different, so today at the beginning it was a little bit tough,” added the Reds attacker. “We know our quality and we are happy with each other.”

For all the talk of Salah having a “slow start” to the season, he now has three-goals in his last two outings — six goals in all competitions in only 13-appearances. If that kind of ratio is something to be concerned about, then Liverpool supporters will be more than happy to deal with what’s a rather good “problem” to have.

Along with Salah, there’s been questions raised about the rest of the Reds three-pronged attack and how they’ve failed to gel in the same way that they were during the second half of last season, but in reality Firmino has been steadily scoring and creating while Mane put away his first in seven appearances against the Serbians to get himself back in the groove.

“They have been working their socks off in every game already. Scoring is something special for them,” explained Liverpool defender Virgil van Dijk, in awe of the amount of work the front-three put in every time they step on the pitch. “It was obviously very important to win. After the first 20 minutes we played a good game; we controlled the game, kept a clean sheet and scored a couple of good goals,” continued the Dutchman, who was the stand-in skipper on the night. “We controlled the game; then you need to score goals and see the game out professionally.”