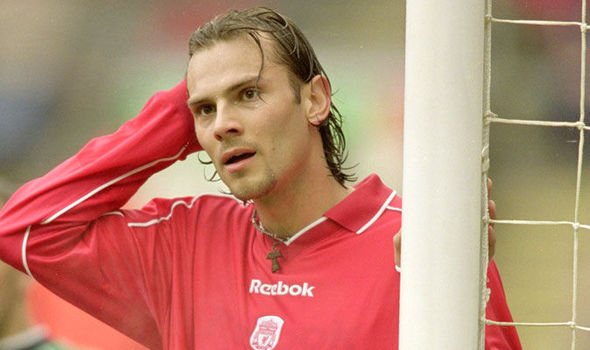 Major international tournaments often put little-known players into the spotlight, and in 1996, Patrik Berger was a perfect example. The Czech attacking midfielder was 22 years old at the time and had already played his part in a Bundesliga win with Borussia Dortmund, but it was at Euro 1996 that he really announced himself to the world and English football fans in general, playing a key role as his nation made it all the way to the final and even scoring the opening goal in that game.

He caught the eye of Liverpool and made a move for £3.25 million, later stating that the day he signed his contract was the happiest day of his life, having admired the club and dreamt of joining them from an early age. Well, Berger didn’t have to wait long to hear an Anfield roar rise up in his honour; he scored two goals in one of his first appearances in an away game against Leicester and then blasted in another brace in a 5-1 win over Chelsea for his full home debut.

Blessed with an absolutely wicked left foot, Berger’s early goals were magnificent and he developed a reputation for scoring the sort of spectacular strikes that wouldn’t look out of place on any end-of-season highlight reel. The Czech had a real knack for shooting the ball with an exceptional blend of power and precision, often leaving keepers rooted to the spot and wondering what happened as the ball blew past them.

In the early goings of his Liverpool career, Berger was scoring so often that he was seen as a potential rival for Stan Collymore, but he’d never really been an out-and-out centre forward and ended the season with 9 strikes in all competitions. Despite an excellent start, Berger’s future at the club was cast into doubt in his second season. He scored a superb hat-trick against Chelsea, but was often finding himself on the bench, with clear tension developing between the player and his manager, Roy Evans.

Berger was repeatedly linked with a move away, but Evans’ eventual departure and the arrival of new boss Gérard Houllier flipped the script, with Berger sticking around and becoming a better-rounded and more influential player under the Frenchman. Houllier really valued Berger and seemed to know how to get the best out of him, with the Czech scoring 18 goals over the course of the subsequent two seasons.

Without doubt, he will go down as one of Liverpool’s most underrated players in the Premier League era along with the likes of Steven Finnan, Heskey, Smicer and Dirk Kuyt. Every long-term Liverpool fan will have their own favourite memories of Berger, with terrific goals against Wimbledon and Tottenham certainly leaving their mark, but one strike that surely stands out in every fan’s mind came in March of 2000 against Manchester United. Liverpool had been awarded a free kick around 30 years from goal and Berger stepped up, blasting an absolute thunderbolt past a helpless Raimond Van Der Gouw.

Unfortunately, a bad ligament injury broke Berger’s stride in the 2000-01 season. He’d been in fantastic form, but would never regain his place in the starting line-up, netting just four times in his three final seasons with the club. However, he did still manage to play a part in some key successes for Liverpool, setting up Michael Owen’s winner with a peach of a pass in the 2001 FA Cup Final and appearing in the club’s UEFA Cup win of that year too.

If only he’d had a little more luck with injuries, Berger could have left an even greater legacy at Liverpool. In the end, he was forced to move on to Portsmouth, followed by Aston Villa, Stoke City, and an ultimate return to his homeland with Sparta Prague. He scored 35 goals at Liverpool in 195 total appearances and will be fondly remembered by those lucky enough to see him in his prime.