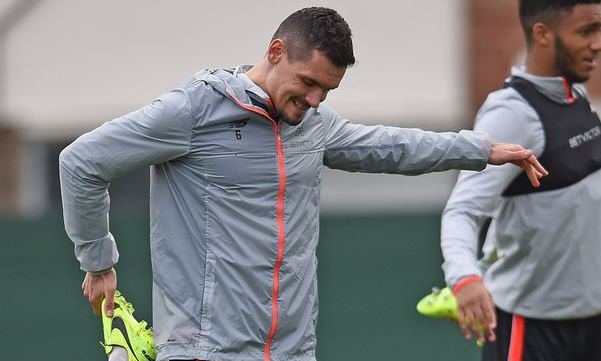 After putting three unanswered goals past AFC Bournemouth on Saturday, Liverpool are set to enjoy a bit of a break with their next outing the first leg of their Champions League Round of 16 tie with Bayern Munich on Merseyside a week from today.

Reds boss Jurgen Klopp has been a big proponent of warm weather training since he took the reigns at Anfield and he’s seized the opportunity to get the squad a little sunshine ahead of their showdown with the German giants by jetting them off to Marbella, Spain.

While the rest of the boys enjoy a break from winter, there’s two noticeable absentees from the team that headed for the continent yesterday with defensive duo Dejan Lovren and Joe Gomez missing out — something that the gaffer isn’t too pleased about.


“Dejan is not here and Joe [Gomez] is not here,” said Klopp. “That’s never a good sign, I would say, but we will try everything to make Dejan available for Munich. It will be a tight race,” explained the German manager. “For him, it makes sense in the moment to be in another place to do what he has to do. It wouldn’t have helped if he was here, so we will try everything – that’s clear.”

The Croatian defender has been out of action since picking up a hamstring injury in the FA Cup exit to Wolverhampton Wanderers back in January and this latest setback looks to be leading to a prolonged spell on the sidelines.

Although it didn’t really look like it against Bournemouth, injuries are starting to take their toll on the squad and while the rest of the team trained midfield trio James Milner, Fabinho and Georginio Wijnaldum were missing — though, thankfully, they’re all expected to return to full training shortly.

“It’s how it is after games, you have a couple of problems,” mused Klopp, speaking to the club’s official website. “Millie and Gini still struggle with their illnesses, so they did a bit of work in the hotel. Fabinho felt [something] a little bit; it will not be a problem, but there was no reason for him to be out today,” added the boss. “Hopefully he can train tomorrow and if not then the day after that. None of them are serious, all will be fine.”