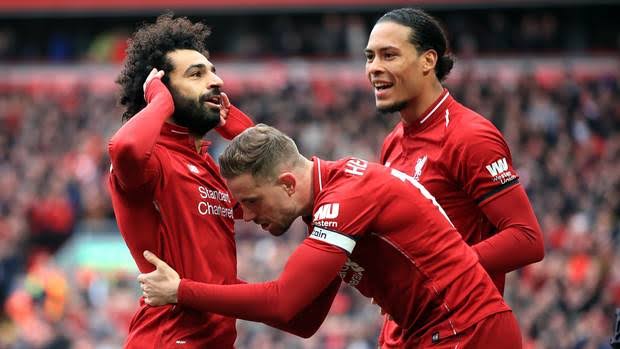 In the biggest games you need your biggest players to perform and as Liverpool ran out 2-0 winners over Chelsea on Sunday, the Reds got just that with both Sadio Mane and Mohamed Salah finding the back of the net in a second half blitzkrieg that stunned their visitors.

The Senegalese forward, who has been in a rich vein of form, should have a pop at an online casino considering the luck he’s having. The Blues haven’t been the strongest defensively this season and somehow they left the former Southampton man unmarked to nod in a peach of a cross from club captain Jordan Henderson.

If Mane’s opener settled the nerves, Salah adding a second cleared the air completely with the Egyptian smacking a dipping long-range shot that Blues ‘keeper Kepa Arrizabalaga could only watch swerve past him.

“I don’t think, I just feel!” said the Reds attacker, flashing his trademark smile as he spoke to the press following the final whistle. “Normally I shoot [with the] inside of the foot but this one – because it’s far [out] – I just hit it with power,” explained the Egyptian, whose goal kept him in the race for a second successive Golden Boot. “I was a bit lucky that the ball hit the net like that.”

Modesty aside, it’s a sure goal of the season contender and one that kept the Anfield faithful neck deep in the title race after Manchester City won at Crystal Palace earlier in the day.

If nothing else, it bodes extremely well for a side that has struggled for goals as of late. Salah, in particular, hasn’t been his prolific self, but the Egyptian’s thunderbolt of a strike hit the back of the net before you could say bestcasinositesonline three-times fast and it’s exactly the kind of goal that’ll help bolster his confidence as the campaign draws to a close.

“It blew me away,” enthused Reds manager Jurgen Klopp. “I was really happy. I saw it really well; maybe I saw it first the ball would go in,” added the German, clearly still in awe. “It was a really, really outstanding finish.”