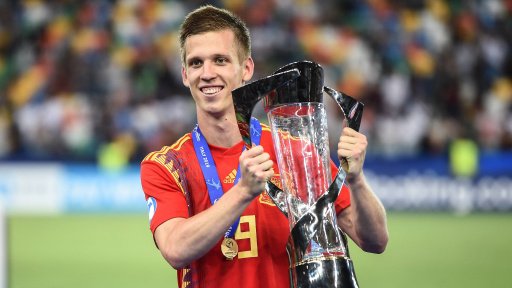 Liverpool were linked with numerous quality players in the summer transfer window but they ended up luring only youngsters like Van den Berg and Elliot. Also, Adrian was signed late in the window to replace Mignolet at Anfield.

If reports in the media are anything to go by then Liverpool considered signing Spanish international and Dinamo Zagreb attacker Dani Olmo.

According to Marca, the 21-year-old starlet was heavily linked with a move away from the Croatian club in the summer but in the end, he stayed put.

The renowned Spanish news source have claimed that Liverpool and other top clubs knocked on the door to hire his services but the asking price of £31m-£36m was an obstacle.

Dani Olmo has effectively played in multiple offensive positions. For Dinamo Zagreb, he has mainly played in his preferred CAM role but for the national team (U-21) has used him in the wide attacking positions.

Last season, the Spaniard started 35 games in all competitions for the Croatian side, scored 12 goals and provided 9 assists.

In the current campaign, so far, in 9 appearances, he has directly contributed in 10 goals (5 goals and 5 assists) (Transfermarkt). He completed more dribbles (vs Atalana) than any other player in the opening Match-week of the Champions League (Marca).

For Spain’s U-21 team, he has so far scored 6 goals in 12 appearances. Back in June, Olmo featured in four fixtures in the U-21 European Championships, netted three times and also provided one assist. He scored a goal against France in the semis and netted the decisive goal vs Germany in the final to win the trophy.

Liverpool had a quality CAM in the form of Philippe Coutinho, who was sold to Barca in the January transfer window of 2018.

The Samba star struggled at the Nou Camp and now finds himself at German club Bayern Munich on loan.

Since Coutinho’s departure from Anfield, the Reds have not replaced the Brazilian but under Klopp’s guidance, we have excelled big time after improving other key areas.

Have your say? Do Liverpool need to sign a natural/quality central attacking midfielder? Should Klopp splash the cash to lure Dani Olmo?