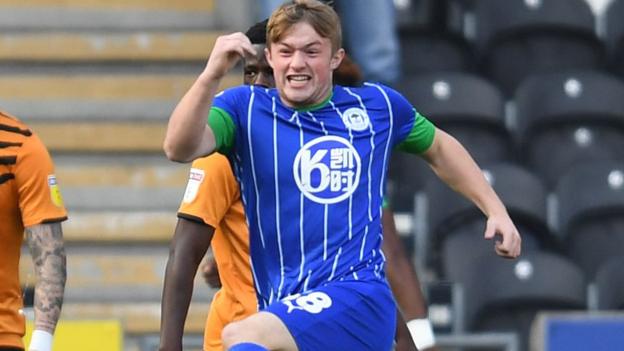 In the summer transfer window, Liverpool sold young center forward, Bobby Duncan, to Italian Serie A side Fiorentina. Now, they are looking to sign a teenage striker to strengthen their academy.

Last month, Goal.com reported that the likes of Liverpool and Everton are interested in hiring the services of Wigan starlet Joe Gelhardt.

More recently, Team Talk have exclusively revealed that the Reds and the Toffees are ready to step their chase to sign the 17-year-old striker, who will be left to choose between the two Merseyside clubs.

Last season, Gelhardt played in three FA Youth Cup games for Wigan Athletic and found the net three times. He made his first team debut for the club in 2018 vs Rotherham.

As far as his international career is concerned, so far, he has made three appearances for England’s U-18 team (yet to find the net).

In the current campaign for Wigan, the youngster has not started any contest as yet but he has made four appearances in the Championship (total 73 minutes on the field) and scored his first goal last month against Hull City away from home and secured a point for the Latics (Transfermarkt).

After Gelhardt opened his account vs The Tigers, Wigan manager, Paul Cook, heavily praised him and told Evening Express:

We shall see how the transfer saga unfolds in the coming months. In your opinion, should Liverpool secure the signing of Gelhardt?