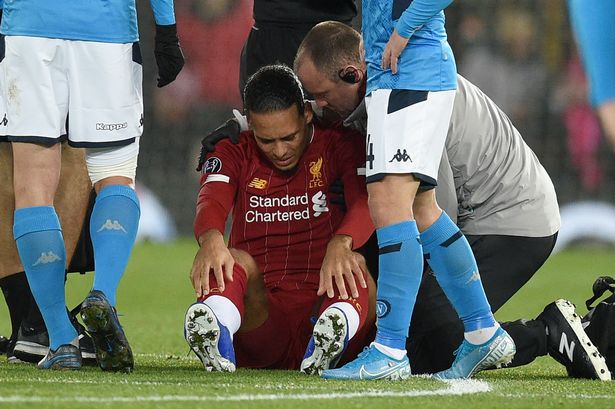 Napoli have not won a single game this month and that did not change at Anfield last night, however, the Italians were able to get an undeserved point against Liverpool thanks to VAR.

Carlo Ancelotti did set up his team well to defend the waves of Liverpool attack but in the end, they were lucky to leave the home of the European Champions without defeat.

Dries Mertens opened the scoring for the Serie A side in the 21st minute of the game. The finish was sublime but seconds before that strike, the Belgian internationally brought Van Dijk down in the midfield but VAR did not see anything wrong and the goal was allowed to stand.

In all fairness, there is no way the 5.5 ft striker can win an aerial dual against our world class 6.3 ft center half.

Therefore, Mertens opted to nudge Van Dijk, the Dutch star needed time to recover and the veteran forward took advantage to give Napoli the lead.

VAR’s decision would have been understandable if the 32-year-old striker had eyes on the ball and made a genuine attempt to win the duel. However, that was not the case, it seemed clear he had no intention of winning the ball and was totally focused on unsettling the Netherlands captain, who reacted after the game and told beIN SPORTS:

“I won the ball. Obviously I think he [Mertens] didn’t even want to challenge the ball at first, so he touched me.”

Unfortunately for Liverpool, VAR was not in their favour. Even Salah got strangled by Koulibaly and the Senegalese was not punished. The Reds bounced back to equalize in the second half and had decent opportunities to earn all three points but they were not sharp in front of the goal.

The Merseysiders remain on top of their group and need a point against Salzburg away from home on the final Match Day to qualify for the KO stages of the Champions League.