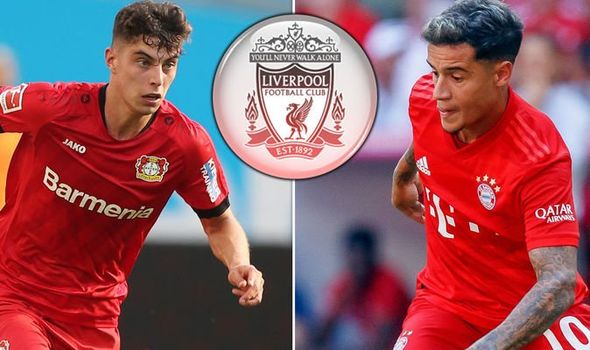 Back in 2018, Liverpool opted to let Phillipe Coutinho leave and used the cash to improve things at the back. Alisson and Van Dijk were lured and both have been immense for the Merseysiders.

However, the Reds have not replaced Coutinho as yet. It will be fair to say Klopp has not missed the Brazilian at all. Since his departure, we have won the European Cup and are on the cusp of winning the Premier League.

However, the German manager should continue to strengthen the squad if he wants to keep them at the top for the long term. In my view, it is now time to finally replace the little magician by signing a top central attacking midfielder in the form of Kai Havertz.

The Kaiser has been linked with us for quite some time but latest reports suggest that the likes of Chelsea and Man United are also interested in the player, who could leave Bayer Leverkusen for £70million (The Guardian).

Last season, the youngster scored 20 goals in all competitions. This time around, he was not in top form in the first half of the campaign. However, since the turn of the year, the 20-year-old has been unstoppable.

In 2020, he has so far featured in 12 games in the Bundesliga and directly contributed in no fewer than 13 goals (9 goals and 4 assists). Recently, Leverkusen manager Bosz heavily praised the attacking midfielder and said that he is a “special” star (Goal).

The 7-capped international can not only play in the CAM role but he can also play on the right wing and even as a striker. Havertz will turn 21 tomorrow and back in November, he told Marca that he is confident to move abroad.

We rely too heavily on our front three, midfielders rarely find the net. In the Premier League this term, our top scoring midfielders are Wijnaldum, Henderson and Oxlade-Chamberlain, who have netted 3 goals each.

The above mentioned trio and the likes of Fabinho, Keita and Milner can play in multiple roles but none of them has effectively played in the CAM position.

In such a scenario, Havertz has what it takes to further amplify the quality of our attack by bring something different. Therefore, Liverpool have to secure his signing but would we break the bank for him? Only time will tell.