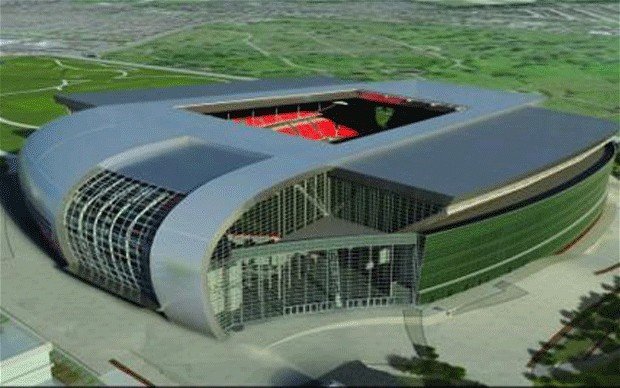 If you read An Epic Swindle: 44 Months with a Pair of Cowboys, you already know the proposed stadium design was one of the early rifts between Hicks and Gillette. Early on, it was clear the club needed more seating to increase revenue to be competitive. A sensible design was mocked up in 2003 and approved. The new stadium would have increased the capacity to a sensible 60,000 with room to grow. Unfortunately, no one had the money to pay for it. Hicks and Gillette took over in 2006 and Tom Hicks shredded the plans and hired a Dallas-based firm to design a spaceship looking monstrosity.

The Hicks plans have officially been buried forever as FSG as opted to proceed with the original stadium design from 2003. Using this design means they can tweak it a bit without having to get designs re-approved by the planning people which apparently takes years…and years…and years. This really is not surprising news at all. Judging by early reports a few months ago and even comments from Tom Werner and John W. Henry, it seemed that this would be the eventual course of action. The bigger question, however, is what shall this new home be called? Naming rights are key for the development so it has to be called SOMETHING.

What do you think, Kopites? If you had your choice of sponsors, who would it be? Would it be called Pepsi Arena? McDonald’s Park? Qantas Field? The News Desk would personally go for something like Trojan Personal Massager Bowl, but the News Desk is a sick little monkey.

31 thoughts on “Your Opinion: Who Should Sponsor the Stadium?”