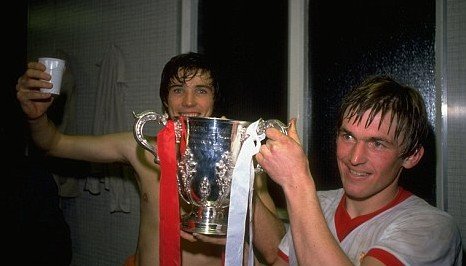 League Cup Match Preview
January 24, 2012January 24, 2012 Steven McMillan 1 Comment Carling Cup semi-finals, Kenny Dalglish, Manchester City, Must Win, YNWA
I won’t lie; when I’m sick, I tend to be — in the very least — 85% meaner than normal. If you want to combine our downright embarrassing loss at the Reebok stadium on Saturday with my sinus nightmare, the beginning of the week saw me morph into one of the worst people on the planet. The thought of having our midfield, the one worth more than Bolton’s entire squad combined, overrun so thoroughly was equivalent to repeatedly striking me in the head with a piece of bamboo. Now, no one can sustain a mood as dark as mine for long without going completely off the deep end, and the thought of knocking Manchester City out of the Carling Cup on Wednesday has already brightened me up considerably.

Yes, you read that right. Doom and gloom might be the sole prerequisite of supporting Liverpool during these unsteady times, but, for the rest of us, true faith can’t be chucked to the side even if it goes against every fibre of what you know to be right. While we were being an embarrassment ourselves and resigning ourselves to 7th place for yet another week, Manchester City were putting Tottenham to the sword with a last minute 3-2 win that keeps the Citizens balancing at the top of the pack.

Maybe, I should amend faith to “blind faith”. Nah, you know what I mean.

The fact of the matter is, I think, despite our failure to grind out results against teams we should be beating, when we step onto the big stage, we’re going to find our voice. For once, this isn’t just something I’m throwing out there with no reason to my argument. Stats be damned; stick a team that “matters” in front of us and we’re showing up. I’ve beat this drum throughout this season and drawn this same relation more than once, but it remains as poignant and valid as ever. We can’t beat Norwich at home, but we’ll go to the Bridge and abuse Chelsea. Stoke can hold down the fort, but Arsenal can’t. You know the drill.

While our home form hasn’t been anything to write home about, our uncanny tradition of having things go right when it truly matters can give us hope. Semi-final victories against Chelsea, last minute winners against Arsenal, making Barcelona pay for thier arrogance; Anfield has seen some magical moments that defy comprehension. Memories of League Cup victories may not last long when compared to more prestigious triumphs of years gone by, but the lack of silverware coming into the trophy case will only temper our desire to makes this one count. To be fair, while this may not be our last shot at honours, it remains our best.

Saying a little prayer never hurt no one. Except during the Inquisition.

To think that a number of our newest squad members haven’t won anything of importance just adds to the urgency they should be playing with. Getting a real opportunity to win trophy’s doesn’t come along every day and for some of them, may never come around again. Kenny made his position clear after the shambolic display at Bolton: if his players continue to churn out performances unworthy of the shirt, the burden of wearing it won’t be their’s for much longer. While these words will be seen as a recognizance of a problem with a view to resolve, the directness in which Dalglish addressed his under performing team will come as a shock to some.

I may be reading too far between the lines here, but completing less than 60% of your passes is no longer acceptable. Dalglish is often aloof and guarded in interviews, but his willingness to speak plainly spoke volumes. Being unable to locate the net with a laser guided banjo will not continue. Shirking your defensive responsibilities lest you dirty your boots? Now a thing of the past. With those calculated words, the boss made sure everyone knows his intentions. No one is safe; the Sword of Damocles hangs over each of their heads.

Could there be a more powerful motivator? Creating a siege mentality is one thing; when it’s the boss, and his squad against the world, the impossible can be achieved. Dalglish tried that. We’re past it. Those players who came from less prominent clubs seeking the trophies that were always out of reach now know where they are. What it means. When it’s perform, or we’ll find someone who will, you beat Manchester City and book a ticket to Wembley. You don’t want to consider the other possibilities.

One thought on “Manchester City: The Final Chapter”