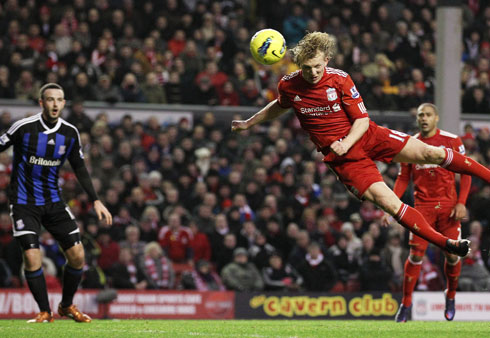 FA Cup Match Preview
March 17, 2012March 17, 2012 Steven McMillan 2 Comments Andy Carroll, FA Cup quarter-final, Jose Enrique, Kenny Dalglish, Luis Suarez, Martin Kelly, Peter Crouch, Ricardo Fuller, Steven Gerrard, Stoke City FC, Tony Pulis
As the end of the season begins to rear its ugly head, FA Cup weekends take on a massive importance to clubs sitting outside those coveted Champions League spots. With the Carling Cup already in the bag, a domestic double is becoming a very real possibility with a quarter-final clash against bogey side Stoke City standing in the way. It’s been a tale of two distinctly different Liverpool teams: the ones who can’t muster a result despite oceans of pressure and the ones who know how to dig deep overcome heavily favored opposition. With the Reds running out 3-0 winnersagainst local rivals Everton earlier this week, Kenny Dalglish will be fully expecting the former rather than the later to carry that momentum forward.

In one of our most cohesive performances this season, a master class display from Steven Gerrard sent the Red half of Merseyside into raptures as he thumped a hat-trick past Tim Howard. The Captain is known the world over for winning matches on his own, but the plaudits could have easily been shared by Luis Suarez with the Uruguayan playing a vital role in 2 of the goals. Despite sharing the pitch for only a short time, the understanding between Gerrard and Suarez has begun to resemble the one he shared with a certain Fernando Torres with the fruits of that pairing being evident as Everton was put to the sword.

The mobility and trickery of Suarez coupled with the movement and vision of Gerrard equals bad news for Stoke City who narrowly crashed out of the Europa League to a Valencia side that oozes these same qualities. The Spanish side’s highly fluid front line ran amok against Stokes usually tight defense and Dalglish will be looking to exploit the same vulnerabilities as the Reds go marching on. And if that doesn’t work? Well, we’ve always got Andy Carroll. The Potter’s gritty style of anti-football could suit the Geordie hit man just fine as he showed against Everton that he’s on the upswing. If you can’t score, in the very least you can contribute, and the pony-tailed weird-beard held the ball up well allowing attackers to move into the space he created. In the air, he was formidable winning a number of key aerial duels as well as sending in a number of well placed flicks.

Even with the front line finally finding some semblance of form, Stoke is never easy to come up against. It’s hard to begrudge Tony Pulis his record despite the wretched, unattractive football on display, but the man keeps on punching well above his weight. Winning ugly is still worth 3 points and the Stoke boss seems to have our number on speed dial as we stumble, if not fall, against his side. The Potters narrowly lost out to Chelsea by a razor thin 1-0 score line last time out with them coming close to equalizing on a number of occasions as they tried to further dampen the London outfits Champions League charge. Former Liverpool target man Peter Crouch is expected to lead the line on Sunday which could give our back four something to worry about.

With Crouch looking to mop up in the middle, the real battle at the back could be won on the flanks with Jose Enrique and Martin Kelly playing pivotal roles in whether or not the Reds progress. We’ll need to combat the threat of the long throw, one of Stokes signature weapons, as well as stay strong on set pieces. Corner’s have been our achilles heal and with the aerial threat the Potters pose, there will be dangers running in from all over. With danger man Ricardo Fuller missing out through suspension, the visitors will pose less of a threat on the counter-attack, but this wouldn’t be the first time we’ve underestimated an opponent and paid the price. The stakes are far too high to do that again.

As our domestic campaign falters, the Cups have been a welcome respite from a transitory season filled with more bumps then I care to recall. Our Carling Cup victory has helped ease the growing pains of a squad still finding it’s feet, but a domestic cup double could be the only way to truly salvage our season as Champions League qualification now appears to be a bridge too far. Just ’cause we’re in transition doesn’t mean we can’t win stuff along the way.

Don’t forget to enter our contest in conjunction with Soccerpro.com and win yourself a brand spanking new Liverpool home shirt.

2 thoughts on “SEARCHING: Stoke and Destroy”