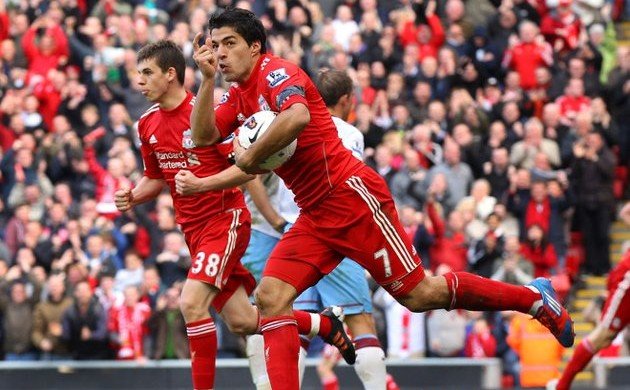 Match Reaction Premier League
April 7, 2012April 8, 2012 Steven McMillan 5 Comments 1-1 draws, Alex McLeish, Aston Villa, Chris Herd, Daniel Agger, Doni, Jonjo Shelvey, Jordan Henderson, Luis Suarez, Shay Given, Steven Gerrard
There’s improvement, and then there’s just getting by. Chris Herd fired Aston Villa ahead after only 10 minutes of play as the visitors had the better of Liverpool throughout much of the early exchanges. It would take a Luis Suarez tap-in, after the returning Daniel Agger hit the bar, to level the playing field late in the second half to deny Villa a valuable three-points in their fight for Premiership survival. A draw is always better than a loss, but as Kenny and the boys look to halt a disturbing form free-fall, sharing the spoils at home to a injury hit side floundering near the bottom of the table was far from the response we were looking for.

A moment of silence before the match honored the 96 Liverpool fans lost at the Hillsborough Stadium disaster. This was the Reds last home match before the April 15th anniversary, and it seems only fitting that they’ll be playing Everton the day before in the FA Cup semi-final at Wembley. Win or lose, it will be a great day out and a fantastic way to remember those who are no longer with us.

With that being said, no one actually wants to lose. Though, after the performance against Villa today there will be some questions hanging over each and every players head, especially after the conceding an early goal and losing almost all momentum afterwards. Alexander Doni mistimed his jump and flapped at a cross allowing the ball to drop dangerously in the zone. As it was cut back for  an unmarked Chris Herd, you could hear the groans rising and then finally hitting their peak when his spectacular curling ball flew beyond the reach of our diving Brazilian.

It would be unfair to place the blame solely on Doni, who hasn’t started a competitive match since playing for AS Roma at the end of last season. You can blame the team though for their response afterwards. Earlier on, it was your typical fire & brimstone start from the Reds. Pressure, possesion, passing and a disallowed goal after Shay Given, who was a monster between the sticks, turned away a Dirk Kuyt effort when it appeared to have crossed the line. Bad calls from the linesman or referee have to be accepted since there’s nothing we can do to change them; but the sad sack response from the Reds? Not acceptable in the least.

There wasn’t much doing for the remainder of the half until in the dying minutes, Dirk Kuyt somehow tipped a Steven Gerrard shot-cum-cross over the crossbar from about 2 yards out. If you needed any confirmation that this wouldn’t be our day, you had it right there. The second half brought us a tad bit more joy as Villa continued to retreat farther into their shell, attempting to hang onto their lead at all cost. Jordan Henderson and Jonjo Shelvey, playing in their preferred central midfield roles, were tasked with breaking down what proved to be a 10 man back line. Both youngsters played a part in the second half psuedo-revival with long passes in particular on display. Still, it would be the Captain who would be responsible for turning the tide.

Another Steven Gerrard cross wreaked havoc on the visitors as Luis Suarez’s head connected perfectly, only to see it ricochet off the post. That was the 7th time Luis hit the woodwork this season and though few were surprised at that, it still looked like the ball would cross the line before Given palmed it away to keep Villa in front. Seeing the Captain take over on the right wing after Dirk Kuyt joined Suarez up front brought back memories of Rafa’s experimentation playing him out of position. It’s hard to argue that he wasn’t effective there; truth be told he was likely the best player we’ve seen on the right all season, but trying to shunt him out of the center never worked for Rafa and it’s highly unlikely it will for Dalglish.

The introduction of Daniel Agger late in the second half brought a boost of confidence to a side who were looking more and more like they were heading for yet another defeat. The big Dane has been out with cracked ribs since the Carling Cup final victory over Cardiff in February, and his presence lead to the equalizer after he, much like Suarez earlier, sent a header off the bar from a Steven Gerrard cross. With Given sprawled out and the Villa defense reacting too slow, the ball dropped to the Uruguayan who made no mistake with a poachers finish from two yards out to finally level the score.

The expected late onslaught ensued, though the go-ahead goal, as per usual, couldn’t be found. Stopping the rot can be a slow process, but the Reds have only a small amount of time to do it in if they’re going to restore a little pride to a season of baffling under-performance. While this match could be a stepping stone in the right direction, the trip to Ewood Park on Tuesday will set the tone for the semi-final against Everton on the weekend.

Roy Hodgson was given the sack after a dismal result against Blackburn and although one point is always better than none, the significance of this match won’t elude Kenny Dalglish. If there ever was a time to turn things around, this is going to be it.