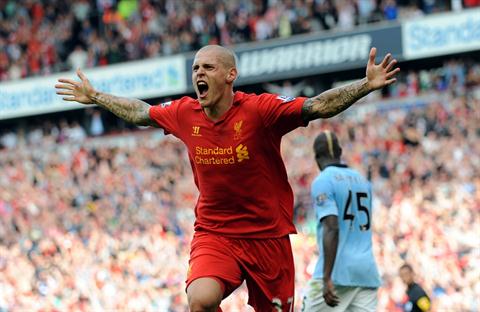 Match Reaction Premier League
August 26, 2012August 27, 2012 Steven McMillan 6 Comments 2-2 Draw, Brendan Rodgers, Carlos Tevez, Fabio Borini, joe allen, Joe Hart, Jonjo Shel, Lucas, Luis Suarez, Manchester City, Martin Skrtel, Pepe Reina, Raheem Sterling, Roberto Mancini, Sebastián Coates, Steven Gerrard, Yaya Toure
Martin Skrtel got to play both hero and villain as Liverpool ran out a 2-2 draw with defending champions Manchester City. The Slovakian put Liverpool in front with a perfectly timed, thumping header from a Steven Gerrard cross in the 34th minute that sent Anfield into raptures. With the Reds leading 2-1 after Yaya Toure leveled and Suarez snatched the lead back with a stunning free kick, a lazy backpass from Skrtel was latched onto by Carlos Tevez. The striker made no mistake in rounding Reina and slotting home his 100th Premier League goal to ensure City shared the spoils. After the humbling at West Brom just over a week ago, a fair number of Liverpool fans would have bit your hand off if they were assured a draw before the match. After the final whistle was blown, those same fans were left wondering where the rest of our points went.

Maybe that’s a bit harsh, but when you put the sword to a side like City you want it count. With Lucas substituted off within the first five minutes after pulling up with a thigh injury, Jonjo Shelvey took up position in the center of the park with Gerrard and the eventual man of the match, Joe Allen. The Brazilian, who’s looked excellent every second he’s been on the pitch after returning from a long lay off, will have a scan tomorrow on what will hopefully not be a season defining moment.

Losing the best defensive midfielder in the Premier League to injury was a serious problem for Kenny Dalglish and though new boss Brendan Rodgers has taken steps to plug in the gaps, we’re always going to be a better side with Lucas in the starting eleven. Regardless, the absence of the Brazilian wasn’t quite the blow we initially feared when Allen, Shelvey and the Captain began controlling he middle of the park after the visitors were the better side over the first 20 minutes. Carlos Tevez would almost open the scoring from an audacious angle after a backline mix up gave him space in the box, but it would be Martin Skrtel who would once again prove he’s the man for the big occasion.

Surprise starter Raheem Sterling whipped a cross into the box that Fabio Borini was unlucky to turn just wide of the target and Steven Gerrard had a chance or two from distance, but in the 34th minute a pin-point corner from the Captain would find Skrtel streaking into space. The big Slovakian, who recently signed a contract extension, has a habit of making Zonal Marking a set piece look redundant and continued that streak today by putting the Reds in front with a powerful header past a stranded Joe Hart in front of an adoring Kop.

It was looking like a new dawn under Brendan Rodgers when, even after the halftime whistle, his side continued to boss the game and press the visitors high up the pitch; but old habits die hard and a lapse in concentration allowed City back into the match when Yaya Toure capitalized on a defensive error to draw level. Carlos Tevez played provider when Skrtel could only muster a weak header to deflect the Argentinian’s cross across the face of goal. With the ball ricocheting off a helpless Martin Kelly and into the path of the Ivorian midfielder, that all important lead would disappear. Who was at fault for the mix-up between defender and goalkeeper is up for debate, but what’s plain to see is that Tevez should not have been one on one with Raheem Sterling in our penalty box to begin with.

What’s done is done and an immediate response was needed; and that’s exactly what we got when a shocker of a free kick from Luis Suarez put the Reds back in the drivers seat. It was a bending, majestic shot of pure beauty and although the Uruguayan had a quiet game by his own lofty standards, the quality of that delivery will live long in the memory.

With the Kop in full voice and bouncing along with every assured pass from Joe Allen, each time Sterling took on Kolo Tourse and with every touch from Sebastian Cotes, Rodgers watched his side begin to blossom. Though it’s still a work in progress, Rodgers will be heartened with the display the entire team put in as they look to adapt to the new system and tactics.

Even with all the positivity swirling around Anfield as the minutes ticked by, we’d once again see Liverpool outplay, outmatch and outwork supposedly superior opposition, yet come away with less than they deserve. A lazy Martin Skrtel backpass intended for Pepe Reina was latched onto by Carlos Tevez and the striker would get on the scoresheet at Anfield once again as he saved Roberto Mancini his first defeat of this early season. The more things change, the more they stay the same as the all-in-vain late flurry from the Reds saw Andy Carroll go close with a towering header after coming on for the still struggling Fabio Borini. As magical as an injury time winner for the big Geordie, or anyone at all, would have been, Anfield is a world away from Disneyland.

A point at home from Manchester City? Hardly a result to lose sleep over. We’re improving in leaps and bounds; that’s plain to see for even those showing a woeful disinterest in systems, tactics and the like. Results are inevitably what matters when the points are tallied up in May, but though it’s still early doors, the advancement of the squad will pay dividends down the road. Getting down that road isn’t always the easiest, but if it includes more days like today and less like last weekend, then the journey won’t be all that bad.