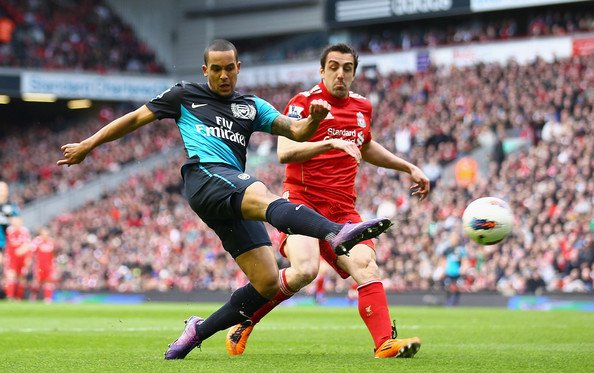 Match Preview Premier League
September 1, 2012September 2, 2012 Steven McMillan 2 Comments Adam Morgan, Andy Carroll, Arsenal, Arsene Wenger, Brendan Rodgers, Clint Dempsey, Fabio Borini, Luis Suarez, Lukas Podolski, Nuri Sahin, Pepe Reina, Raheem Sterling, Robin Van Persie, Transfer Window, Vito Mannone, Wojciech Szczesny
There may not be a lot of love lost between Liverpool and Arsenal, but after the transfer window slammed shut yesterday, both sets of fans can agree on one thing: we got hosed. With both teams shipping out players and dramatically lowering their respective wage bills, adding some final hour re-enforcements in the dramatic fashion that only deadline day can provide was not only expected, but required. Needless to say, both clubs failed to live up. The Gunners were quiet for most of the day, having done the majority of their business early in the window, but the Reds were a different story with links to everyone under the sun flying around. By the time the bell tolled, the best they could muster was a failed attempt to bring Fulham striker Clint Dempsey in on the cheap. With the American finally ending up at Tottenham, you don’t need me to say that the club grossly underestimated the resolve of the Cottagers.

With both clubs still without a win in the League, tomorrow will be The Battle of the Transfer Dummies and all signs point to it having a nasty edge. After getting a pasting at the Hawthornes and drawing with Manchester City, three points are going to be the only thing on Brendan Rodgers mind. It’s time that the season started in earnest and piling the misery on Arsene Wenger’s side will be the best way to distract a restless support from the clubs shortcomings in the window.

A lack of transfer activity isn’t the only thing these two have in common. Missed chances has been another unifying factor for both clubs and with only 2 goals in 4 matches between them — surprisingly, all from Liverpool — there’s a real sense of urgency going into this one. It’s without doubt that Arsene Wenger is still having trouble sleeping after the sale of Robin Van Persie to Manchester United left his side short up top. It could be three matches on the bounce without finding the back of the net if the Reds are able to keep the visitors off the board tomorrow and Liverpool can rely on Pepe Reina being ready to do just that. The Spaniard’s mid-week blunder against Hearts in the Europa League adds some intrigue to the back line, but Brendan Rodgers will be hoping that all as been forgotten well before the first shot comes in on net.

Vito Mannone will start between the sticks for Arsenal if first choice ‘keeper Wojciech Szczesny isn’t passed fit in time for the early Sunday morning kickoff. The Polish ‘keeper missed last weeks draw with Stoke City due to a rib injury and the Italian was called into action on more than one occasion as the Potters put on a show for the home support. Even if the Gunners don’t start with their best, they may not have to worry about much.

The Reds saw a host of chances go begging in both legs of the Europa League Playoff Round tie with Scottish side Hearts and the need to add a clinical finisher to was ignored yesterday as the club brought in no one, despite allowing Andy Carroll to join West Ham United on loan. With only 2 senior strikers at the club, Luis Suarez and Fabio Borini, it’s going to be a hope and pray job each time either of the them hit the floor. Adam Morgan made the jump from reserve to first team when he started against Hearts on Thursday and 17 year old Raheem Sterling has been looking like the Reds most dangerous player over their last three matches, but with both being unproven at the highest level, there’s still a niggling feeling that goals will be hard to come by.  January, and the winter transfer window, is a long ways away.

With Arsenal in town tomorrow, Liverpool are rolling through a tough patch. After drawing 2-2 with Manchester City last weekend and entertaining the Gunners tomorrow, we have Sunderland away on the 15th of September before Manchester United slither into Anfield on the 23rd. Wrapping up six points from our next two will give us a good jumping off point for the rest of the season, but that’s always easier said than done. both teams will be aiming for a top four finish, as always, but with the teams around them doing much more in terms of strengthening, it’s going to be a bumpy ride.

They’ll be done of this “oh how the mighty have fallen” bull right now. Liverpool and Arsenal both play an attractive, attacking brand of football and tomorrow is going to be a belter. I’m not about to say that it’s all sunshine and lollipops, but tomorrow, I’m going to forget the window and enjoy the football. That’s the point of all this, isn’t it?

2 thoughts on “Nothing in the Bank and Less to Show for it: Arsenal Preview”