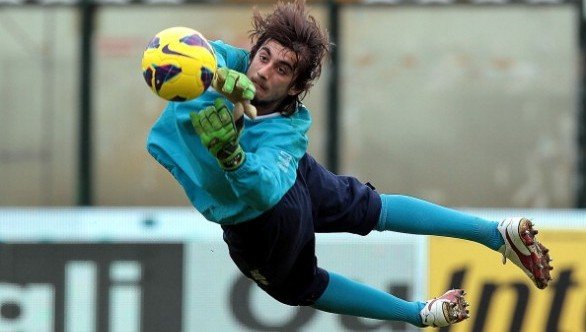 It’s not long now until the transfer window opens back up, and though Liverpool boss Brendan Rodgers has pooh-poohed the idea of the Reds dipping into the more expensive January market, the Anfield outfit continue to be linked with a number of different players — with a new ‘keeper reportedly on the top of their wishlist.

Confidence in incumbent shot-stopper Simon Mignolet remains at an all time low, and though Liverpool aren’t publicly ready to admit that they’re looking to replace him outright, they’ve made no secret of their desire to bring in competition for the Beglian. With apparent number one target Petr Cech ruled out of leaving Chelsea and Fiorentina ‘keeper Neto reportedly on the verge of a agreeing to a new four year deal with the Viola, the Reds attentions have apparently been focused on convincing Genoa youngster Mattia Perin to move to Merseyside ahead of schedule.

Or, at least, that’s what his agent will lead you to believe. “I can see Perin playing abroad,” he told Italian media outlet Rai Sport when asked about his clients future in Serie A. “I would like him to stay in Italy, but only foreign clubs can meet the asking price. I think that he will complete this season at Genoa and England is a possibility. There has been contact with Liverpool.”

If you have a goalkeeper that breathing and know the general shape of what a net is supposed to look like, you’ve probably been in contact with the Reds, or at the very least, can pretend that you have. Either way, the 22-year old, who has represented Italy internationally from the u-17’s all the way to senior level, comes with both a high rating and a high price-tag with Il Grifone reportedly looking for £12mil for the up and coming shot-stopper.