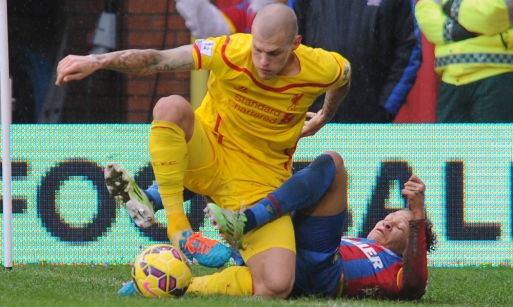 Although he’s been linked with a number of top sides, Liverpool defender Martin Skrtel has re-iterated his commitment to the Reds even though he’s yet to agree to a new deal with Anfield outfit.

The 30-year old has been one of the few bright-spots in a Liverpool side that has underperformed all season long. Playing all but five of the Reds Premier League matches thus far this season, the Slovakian defender has once again engrained himself in boss Brendan Rodgers plans, doing more than enough to earn himself a new contract with the club. Even though he has no intention of leaving Merseyside, negotiations have been dragging on for some time now — but according to him, that’s nothing at all to worry about even though rumour has it that he was ultimately unhappy with and rejected the initial offer.

Earlier in the year, the Reds tied down the likes of Daniel Sturridge, Jordan Henderson and Philippe Coutinho to new long-term deals with Skrtel and youngster Jordon Ibe tipped to follow suit in the coming weeks, but Raheem Sterling remains a serious hold-out with talks set to resume at the end of the season. With the Anfield outfits chances of securing Champions League football now well and truly put to bed following the draw with the Blues on Sunday, getting the 20-year old to put pen to paper could have just gotten that much harder…