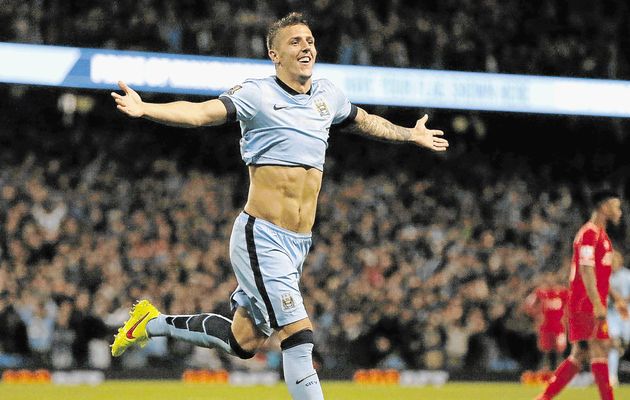 The media merry-go-round is in full swing again with nearly anonymous Manchester City striker Stevan Jovetic once again being linked with a move to Merseyside.

It’s well known that the Reds will be looking to bolster their struggling strike-force this summer with a number of big names being touted as possible targets for the Anfield outfit ahead of an expected clear out. Jovetic, who the Reds supposedly expressed an interest in earlier this year, is a name that continues to pop-up time and again with Liverpool boss Brendan Rodgers reportedly keen on taking the Montenegrin international off of Manchester City’s hands. Now, whether or not Manuel Pellegrini would be keen on letting him leave to another English team is a completely different story altogether.

The Citizens, much like Liverpool, are expected to shake things up this summer with both the 25-year old and veteran striker Edin Dzeko, who is reportedly unhappy with his bit-part role at the club, expected to be shown the door. While the big Bosnian is expected to move to the Bundesliga with former club Wolfsburg ready to pounce, Jovetic’s future is far less certain. Both Inter Milan and Champions League finalists Juventus have apparently expressed an interest, but a number of media outlets are reporting that the Reds are looking to beat the Serie A duo to the punch — of course, there’s no supporting quotes from either manager or player or anything that would suggest any real concrete interest.

The Montenegrin striker has struggled to make an impact since moving to City two years ago in a big money deal. Of the five goals he scored in 17-appearances this season, two of them came against us in the 3-1 loss at the Etihad Stadium back in August, finding the back of the net only three more times the rest of the season. Cut from their Champions League squad for the later stages of the competition and often used from the bench by Pellegrini, it doesn’t look like Jovetic has much of a future in Manchester, but that doesn’t mean they have to sell him to us or anyone else — have you seen their bank account balance?