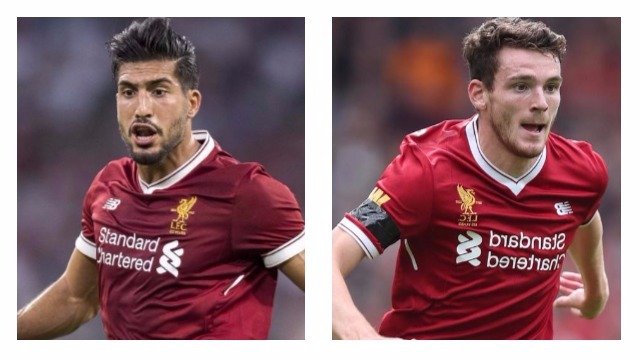 Insisting that a release clause is essential to any deal, rumours continue to swirl around Liverpool midfielder Emre Can’s future at the club with Juventus seemingly the front-runners to secure the German’s signature should he beat a hasty retreat from Anfield. That, of course, could very well change with news that both Manchester City and Borussia Dortmund are closely monitoring the 23-year old’s situation.

Into the last year of his contract, the former Bayern Munich man would be able to negotiate with foreign club’s this January and move on from the Reds for nothing come the summer should he choose not to sign a new deal with Jurgen Klopp’s side. With RB Leipzig star Naby Keita set to join Liverpool in the summer, Can’s departure would be tempered somewhat, but it’d still be a significant blow to the Reds to have such a talented midfielder leave for absolutely nothing.

And, speaking of frustrating, despite making the move to Merseyside only a few months ago, Reds fullback Andy Robertson has been forced to have a talk with boss Jurgen Klopp over his future after making only three-appearances for the Anfield outfit.

With a spot in the starting eleven seemingly his for the taking, the Scotsman traded in relegated Hull City for the Champions League bound Liverpool, but he’s found himself frozen out of the side on the back of Alberto Moreno’s resurgence.

“Of course it’s difficult for me. I don’t make any secret of it. I hate not playing,” said the 23-year old, clearing the air. “It’s been a very frustrating three months for me. I was looking forward to the Holland game to, hopefully, get some game time. I’m delighted to have got 90 minutes,” continued Robertson, going on to insist he’s still battling for a place in the team. “I’ve spoken to the manager because I felt as if the settling-in period was over for me and I thought I was ready to play, explained the Scotsman, revealing that Klopp gave him a few pointers. “I know I’m still well in his plans and, if I work on the things he’s asked me to, then, hopefully, I’ll be in the first team, or closer to it.”