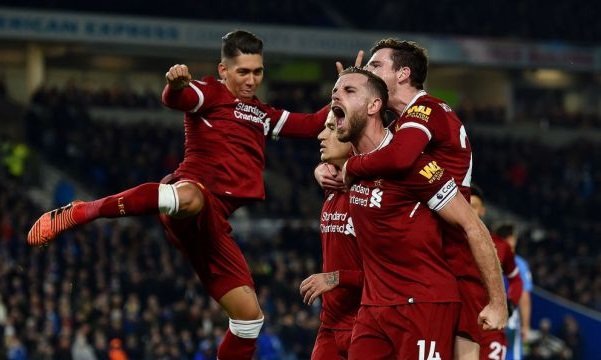 Bagging a brace in the 5-1 demolition of Brighton and Hove Albion on Saturday, Liverpool striker Roberto Firmino showed why he’s so important to the our high tempo of play as he put in the kind of all-action performance that we’ve come to expect from the Brazilian.

“Roberto scored twice, but what he did around these goals is what excites me the most, to be honest,” said Liverpool manager Jurgen Klopp, full of praise for the work put in by the 26-year old. “In all the counter-attacks, pretty much, he won the ball. By being here, by being a little annoying, a little foot, a little toe, that for us is important,” explained the German manager. “With all the rest around him, you need to get used to it,” added the Liverpool boss, outlining how critical he is to the cause. “They are all different and all good. For me, I really like these players. That’s why they are here.”

Catapulting in to fourth place, the Anfield outfit are now back in the mixer in the race for a spot in next seasons Champions League and are starting to hit their stride ahead of a run of really important fixtures. While we’ve got the derby looming next weekend, there’s more immediate priorities for the Reds as Spartak Moscow visit Merseyside on Wednesday.

A draw with the Russians will ensure Klopp’s side will be playing top-class European football in the New Year and though that’ll be crucial if they decide to dip in to the transfer market when it re-opens in January, there’s really no other considerations for progression to the next round than Liverpool’s absolute love affair with the Champions League.

“It’s very pleasing,” admitted Reds skipper Jordan Henderson, pleased with the sides performance on Saturday. “Overall for 90 minutes we played very well, controlled the game with the ball, scored some brilliant goals and defensively I thought we were solid,” continued the skipper. “It was a brilliant second goal on the counter-attack. The front three, Salah, Firmino and Coutinho — fantastic goals,” gushed Henderson, looking ahead to the meeting with Spartak. “So overall we’ve got to keep that going as a team. It’s a big game in midweek and we need to keep the momentum going.”