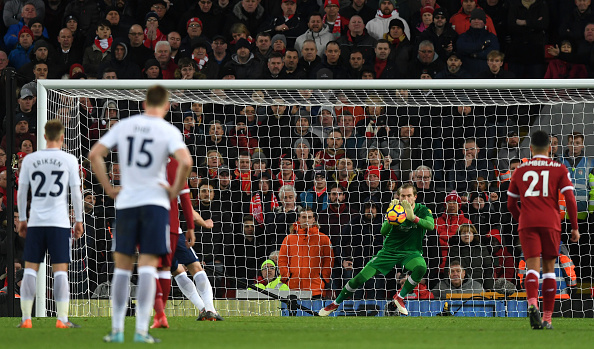 Sharing the spoils under controversial circumstances, Liverpool missed a golden chance to consolidate their spot in third place after a last minute penalty from Harry Kane — his second of the night — grabbed a late equalizer for Tottenham Hotspur.

“Everyone is very frustrated, everyone wants to get the win,” said a clearly disappointed Loris Karius, speaking to Sky Sports following the final whistle. “We scored in the last minute so it’s difficult to describe how you don’t get the three points,” added the German shot-stopper. “The ball was played through, it rolled off Dejan’s foot and then I had the decision to come or not,” explained the German ‘keeper when asked about the first penalty. “I took the risk and he probably touched me a bit as I pulled my arm away, but if that’s a penalty then so be it.”

Mohamed Salah scored a mere three-minutes in to the match and looked like he’d bagged a spectacular winner after Victor Wanyama leveled proceedings with a thunderous strike from distance, but another dubious call from referee Jon Moss handed Kane the chance to atone for an earlier miss from the spot. Karius got the better of the Englishman the first time around, saving his tame effort after he chose to stand his ground, but the Spurs hit-man claimed his 100th goal for the North London outfit with what was effectively the final kick of the game.

While the argument for VAR gained yet another glowing example last night, the Reds, to be fair, were poor throughout the second half. Having failed to take advantage of their visitors sluggish start, Liverpool were pinned back throughout the second period with Salah’s goal — coming at the end of a highlight reel worthy bit of dribbling — their only real attack of note.

“Disappointing, being in the lead and then what happened with the penalty save and Mo (Salah) thinking it’s a match-winning moment, to have it snatched away is disappointing,” said Liverpool vice-captain James Milner. “Seeing it (the penalty) again afterwards there is contact. The referee has said ‘no’ but the linesman is 100% right away,” continued the veteran midfielder, taking a different view from Reds boss Jurgen Klopp. “The first penalty was obviously offside, but Loz (Karius) has pulled off a good save,” mused the Englishman, looking for positives. “It was disappointing we could not control the game second half a bit more, couldn’t get that goal to get us over the line.”