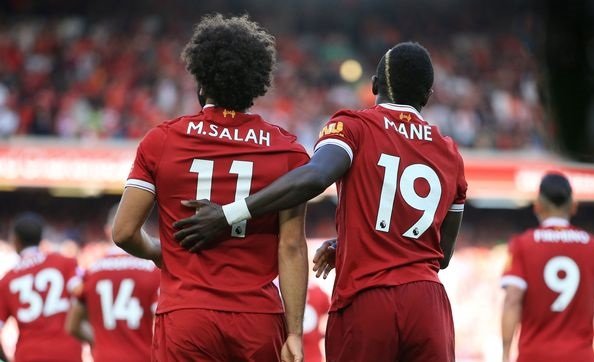 While the result wasn’t exactly what was deserved, there were some positives to come out of Liverpool’s draw with Tottenham Hotspur on Sunday with the attacking duo of Sadio Mane and Mohamed Salah singled out for praise from Reds boss Jurgen Klopp following the final whistle.

“It was a fantastic goal, an outstanding goal. It was an outstanding performance, he was a threat the whole 90 minutes, that’s true,” said the gaffer when asked about Salah’s outstanding solo effort. “We had the last situation of the first half when Mo (Salah) unfortunately passed the ball as little bit too hard for Sadio, otherwise it would’ve been a chance. We had Sadio in a perfect position but he didn’t find the player,” mused Klopp. “Mo scored both goals and the first one was so cool, to get the ball there and with or without a goalkeeper, it makes no difference,” added the German manager, flashing his trademark smile. “And the second one was outstanding, but it’s really difficult to defend because I think everybody in the stadium, his teammates included, thought he would play a pass and in the end he did it by himself; that was probably in this moment the best idea.”

Up to an astounding 21-goals in the Premier League — bettered at this time only by Spurs man Harry Kane — the Egyptian has been Liverpool’s stand-out player and arguably the best signing of the season. Although they missed out on the perfect chance to pull five-points clear of Tottenham, the Reds still held on to their place in the top four and remain ahead of the North London side in the race for a spot in next season’s Champions League.

Along with Salah, the likes of Liverpool fullback Trent Alexander-Arnold and defensive duo Virgil van Dijk and Dejan Lovren all put in quite good showings on Sunday, but the tricky winger and his uncanny ability to find the back of the net is the only thing anyone is talking about — besides those controversial calls, of course.

“I’ve run out of things to say. The unfortunate thing for him is that [Manchester] City are having such a good season with Kevin De Bruyne, otherwise he’d absolutely be walking Player of the Year,” enthused Reds legend Jamie Carragher. “He’s got 21 goals now and you’ve got to remember he’s not even a centre forward. He’s a winger, really, who cuts in. He’s taken a couple of penalties as well, but he hasn’t taken all of Liverpool’s penalties,” added the Sky Sports pundit. “For the second goal he scored, there’s only Messi in world football who can score that, and to say that about any player, sometimes you have to be careful it doesn’t get thrown back at you but what else can you say when he produces a goal like that?”