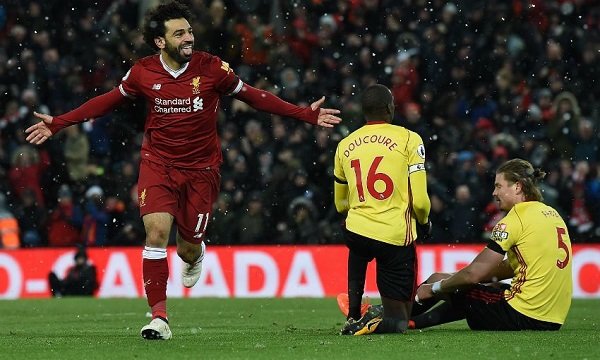 Bagging not only his first hat-trick for Liverpool, but adding a fourth to boot, Reds attacker Mohamed Salah was the undisputed Man of the Match as the Anfield outfit ran out comfortable winners against Watford FC at the weekend.

“The way he scored the goals…the conditions were unbelievably difficult with a little bit of snow on [the pitch] and it was slippy, the ball slowed down, stuff like that,” explained Liverpool boss Jurgen Klopp. “Around the first goal there was exactly one person who has no problem with that and that was Mo. He scored the goal and that helped us a lot. The second goal was a fantastic situation. Sadio’s super pass and Robbo with a fantastic cross and Mo uses his speed,” continued the gaffer. “The next two – just outstanding,” enthused the German manager. “The greed is so obvious, he wants to score, he wants to score but he doesn’t forget the others, if you see the situation with Danny Ings.”

Only two shy of scoring thirty Premier League goals for the season, Salah is now well ahead in the race for the Golden Boot with Tottenham Hotspur striker Harry Kane his closest chaser on 24-goals for the season. That being said, the Egyptian has assisted seven more goals than his English counter-part — including one on Saturday when he set up Roberto Firmino for a mind bending back-heeled strike.

“I think it’s indescribable,” said Reds defender Joe Gomez when asked about Salah’s importance to the team. “The goals he brings are invaluable and he’s just so good to play with,” gushed the youngster. “He complements the team so well, and Bobby and Sadio, they deserve all the credit as well,” added the Englishman. “It’s a pleasure to play with him, especially behind him on that side feeding him the ball – and he does what he does. He’s special to watch and I think we enjoy it on the pitch as much as everyone else does.”