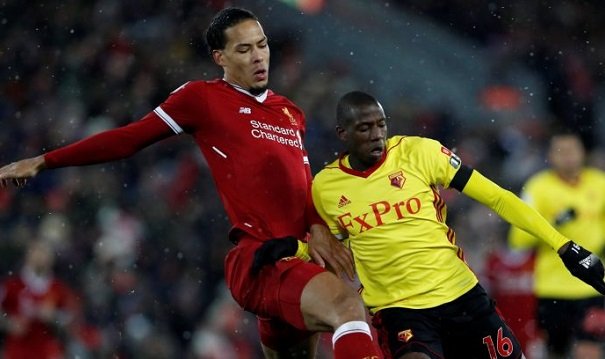 Putting in another assured performance as Liverpool ran out comfortable winners over Watford at the weekend, Reds defender Virgil van Dijk once again stamped his authority on proceedings as the Dutchman helped the Anfield outfit claim all three-points.

As Mohamed Salah did the business at one end of the pitch — scoring four goals and setting up another — van Dijk was doing it at the other, nullifying the aerial threat posed by Hornet’s striker Troy Deeney and keeping the back-line organized as the visitors tried to muster some sort of response to the Reds relentless pressure. In his last five Premier League appearances, the club have kept a trio of clean sheets and conceded only three times; there’s still work to be done back there, but things are certainly getting better.

“Has it been down to Virgil van Dijk? I don’t want to minimise Virgil’s influence but I don’t think it’s like that,” said Liverpool boss Jurgen Klopp, taking a measured approach. “If you want to defend right then everybody needs to know what you do in each situation,” mused the German manager. “Virgil’s influence is 100 per cent there for sure, but really I was never that unhappy with the others that I would say: ‘Now finally we can defend because Virgil is here.’”

With that being said, it’s the perfect time for the Reds to get their act together at the back. The end of the campaign is just around the corner and the Anfield outfit are in to the quarter-finals of the Champions League and within shouting distance of securing top class European football for next season. Coming out of the international break, Liverpool face trips to both Selhurst Park and Goodison Park in the Premier League with a two-legged tie with Manchester City sandwiched in between.

“Everybody knows that anyone we get is going to be very hard,” said Van Dijk when asked about facing Pep Guardiola’s side. “Man City is a very good team, very hard to play against and we need to be 100 per cent or even better to beat them over two games,” stressed the Dutchman, well aware of the enormity of the task at hand. “We can prepare for that when the time comes.”