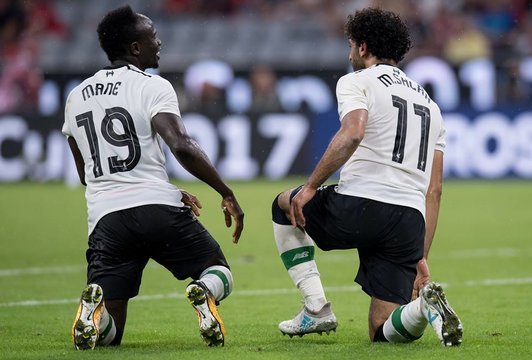 Coming off an outstanding performance against Slovenian champions Maribor, Liverpool have no fresh injury concerns ahead of a meeting with Tottenham Hotspur at their adopted home of Wembley Stadium, but there were a few eyebrow raised when Sadio Mane was named in Senegal’s squad for their upcoming World Cup qualifiers. Inevitably questions arose whether the Reds attacker was ahead of schedule in his return from a hamstring injury, but that doesn’t appear to be the case at all.

“Sadio is still in rehab, that’s how it is. He is indoor and was not even [doing] any exercises outside. That’s the situation in the moment,” said Liverpool boss Jurgen Klopp, sounding a bit perplexed. “They have very important games or at least one; Senegal need one point from two games to be qualified for the World Cup, so I can imagine they feel the pressure a little bit,” explained the German manager. “But we cannot change the situation. If Sadio is fit, we cannot hide it, why should we? If he is fit, we can do nothing to keep him here, he would go to the national team of Senegal, that’s clear,” added Klopp as a matter-of-fact. “But in this moment, I don’t know.”

Liverpool struggled in the absence of Mane when he was away at the Africa Cup of Nations, but they’ve since moved to add some pace up top in the form of Mohamed Salah. The Egyptian, who was only just recently named the Champions League Player of the Week after bagging a brace against Maribor, has settled in to life at Anfield following a big money move from AS Roma over the summer and he’s sure to play a big role against Spurs at the weekend.

“He has quality, there is no doubt about it,” said Klopp, full of praise for the Egyptian attacker. “I think he needed half an hour at Watford, around about, and that was it,” mused the Reds boss. “At Watford, the first few challenges, it looked like he’s not heavy enough, not strong enough, whatever, for these challenges. In the league, it can be difficult, but from this moment on, he was in the league. That’s most important,” stressed the German. “He is a fantastic boy and always it helps if you settle as a person very quickly, perhaps you then settle as a player. I don’t think he needed even half an hour to settle in the team – that was fantastic from the first day.”