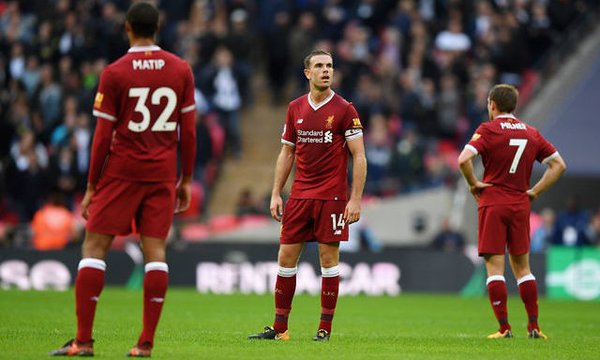 Any goodwill Liverpool generated by thrashing Slovenian champions Maribor last Tuesday in the Champions League quickly evaporated as the Reds slumped to a 4-1 defeat at the hands of Tottenham Hotspur at the weekend. Taking a tumble to 9th in the table, their aspirations of challenging for the title are realistically over and though it’s still relatively early days, their chances of finishing in the top four aren’t looking all that hot either.

“I think we didn’t start well at all, so it’s about being ready for the game – everybody, I know Dejan [Lovren] got took off early in the game but it could’ve been anyone of us that came off because it wasn’t good enough,” said Liverpool captain Jordan Henderson, giving his frank assessment of the team’s shambolic display at Wembley. “We know there are things to improve and things to change quickly. I’ve got every faith that we can [do that] because we’ve got a fantastic team. But we need to work on a few things and change it quickly,” continued the Reds skipper, treading territory that’s now all too familiar. “So it’s a very disappointing day, very frustrating, and it’s only down to ourselves to go and put things right.”

Liverpool were as bad in North London as they were good in Slovenia — where they were confident in possession and dominant in play against Maribor, they were the exactly opposite against Spurs with their ever suspect back-line faltering badly. Down by two before the 15-minutes mark, Reds boss Jurgen Klopp was forced to haul off Lovren just past the half hour with errors from the Croatian leading to both goals.

They did improve a bit after the introduction of Alex Oxlade-Chamberlain and a tactical reshuffle, but Delle Alli added a third before the interval and Harry Kane, who opened the scoring, wrapped things up with the winner not long after the restart to cap off what was a terrible day out in the Capital.

“Everything that happened today was so obvious. It was bad in these moments,” explained Klopp. “The fourth one just happened like it was today. Even then we had chances – that’s just a result of the potential of the team,” added the German manager, clearly feeling the pressure. “But you cannot get results with a performance like today against a team like Tottenham, they were completely spot-on and obviously we weren’t,” added the Reds boss, going on to take the loss on his shoulders. “And that’s my responsibility.”