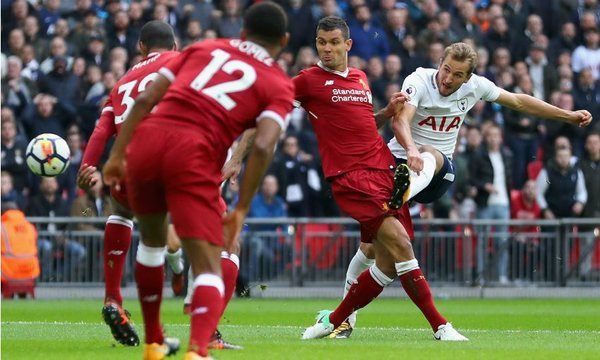 I’m not sure about you, but the one thing I never wanted to hear from my parents was “I’m not angry, I’m disappointed”. The calmness that they dealt with the situation in the aftermath of whatever daft thing I’d done made things that much worse. It was only years later I realized they weren’t just disappointed — they were fuming as well, they just didn’t want to show it.

Less than 15-minutes in North London and it was pretty obvious what kind of day it was going to be as Harry Kane put an end to his poor spell at Wembley and Son Heung-min doubled it up for Tottenhem Hotspur after a pair of defensive errors from Dejan Lovren, who was yanked just past the half hour mark, gifted their hosts the perfect start.

Moments earlier a beautiful pass from Reds skipper Jordan Henderson sent Mohamed Salah skipping through to give the Merseysiders hope, but that was quite short lived as Delle Alli restored their two goal cushion when he added a third to send Spurs cruising in to the break. Kane would go on to add his second — the eventual winner — not long after the restart as memories of Liverpool’s thrashing at the hands of Manchester City came bubbling to surface.

Disappointing? Absolutely. Enough to get me fuming? Yeah, that too.

“We had it felt like 60, 70% possession, but after 2-0, you saw the goals, what we did around the goals… easy to defend. We have defended situations like this all season,” explained Reds boss Jurgen Klopp. “It is my responsibility. I don’t coach the type of defending for the first throw-in. The second goal, we miss the ball and then Son is quicker. We put it on a plate,” continued the German manager, returning to what’s now a common theme. “It’s not about confidence. It’s just about being 100% spot on. It was a really average day for us today.”

Average? Really, that’s all you’ve got?

Having gone unbeaten against the top six last season, the Reds now look like they’re in for a reckoning. Sure, we whipped Arsenal back in August and obviously a Jose Mourinho led Manchester United parked the bus at Anfield, but we’ve done nothing since the start of the campaign from deterring teams from playing football against us. We’re not scaring anyone — if anything, we’re the ones that look shook right from the off.

While this will give the Klopp Out brigade another drum to bang, it’s safe to say the German isn’t going anywhere anytime soon. The man knows a bit more about football than the rest of us, but answers to questions he’s been asking week in and week out are in very short supply.

Isn’t switching out Simon Mignolet and Loris Karius every other match sending mixed signals? Is Joel Matip even good enough to keep around when we finally do draft in a top-class defender? Why is Dejan Lovren playing all hopped up on painkillers and shouldn’t there be someone in the squad that can stand in for the Croatian?

Any goodwill generated from the thrashing of Maribor in the Champions League on Tuesday has since evaporated with the same old problems on display for the world to see, but unlike my parents, I don’t have to pull any punches — I’m sorry to say that it’s both disappointing and infuriating. This side needs a smack upside the head…