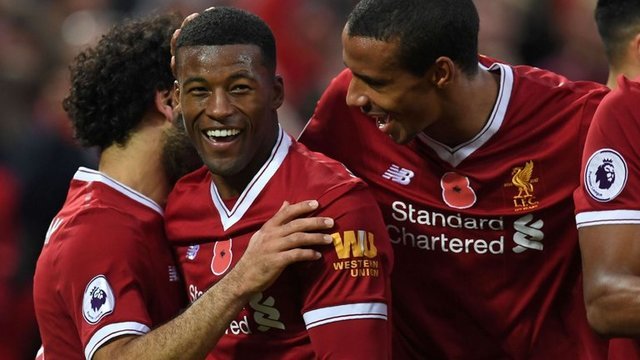 After a predictably frustrating first half against a well organized Huddersfield Town defense, Liverpool found the go-ahead goal early in the first half as Daniel Sturridge bagged his 100th goal for the club. Roberto Firmino would add a second not long after and Georginio Wijnaldum, who missed the thumping away to Tottenham Hotspur last weekend, would add the coup de grâce with his first goal of the season — a smashing effort that sent the Kop End wild.

“It was a tough first half – we didn’t find the spaces, didn’t create a lot of chances, so it was really tough,” said the Dutchman, speaking to the club’s official website. “But in the second half, we did what we had to do, created more chances, outplayed them with our football and scored three goals,” enthused the midfielder. “It’s always a good feeling to score a goal, especially a beautiful goal at the Kop end. It was also my first of the season so I hope more will follow, but it’s always nice to score a goal.”

The Terriers, who secured a memorable win against Manchester United the weekend before, looked on course to seal at least a point at Anfield when the halftime whistle rolled around, but when their hosts found a foothold in the match it was only going to go one way. While the result was exactly what the Reds support would have expected, the fact that they were able to keep a clean sheet — their fourth of the season — was both reassuring coming off the hammering away to Spurs and a good boost going in to the Champions League meeting with NK Maribor on Wednesday.

“At this club the expectations are big,” explained Liverpool defender Joel Matip. “Are the criticisms always deserved? I don’t know, maybe. I don’t have to judge the criticism against us, I only do my best and carry on,” added the Cameroonian. “A lot of people are looking, they are waiting, and if we don’t perform we expect them to do this. Of course it is tough but it is football. We are young, really young, we’re staying together, and we will improve,” stressed the 26-year old. “The players in this team, we are looking forward to what we can become, how we can develop, and we enjoy being part of this team.”