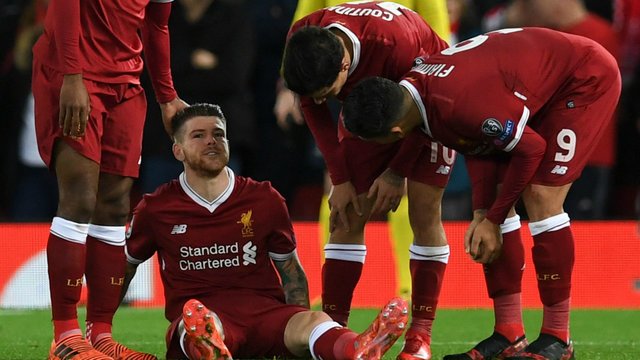 Riding a raft of goals and an unbeaten streak that stretches all the way back to the tail end of October, Liverpool go in to the 229th Merseyside Derby heavily favoured to sweep aside Everton, but after watching fullback Alberto Moreno limp out of the win over Spartak Moscow on Wednesday, Reds boss Jurgen Klopp will have to make a few adjustments to a volatile back-line that’s been stabilizing as of late.

“We need to have further assessment. I cannot say much about it,” explained the German manager, conducting his pre-match presser from Melwood. “It’s a very rare thing. So far the specialists aren’t sure [how long he’ll be out for],” continued German manager, obviously unhappy with the news. “Not Everton, but if it’s in a week or so or a little bit longer we have to wait for that. There’s a little damage around the tendons.”

Although unverified, there are reports doing the rounds that the Spaniard could be sidelined up to six weeks and miss Liverpool’s entire festive fixture list — a massive blow for both the Spaniard and the club. Mum on the topic as he addressed the press earlier today, Joel Matip is also expected to spend an extend period on the treatment table.

Again, it hasn’t been confirmed by the club, but it sounds like he’ll be spending the next month out with a muscle problem. Having missed the win over Brighton and Hove Albion last weekend and the Champions League clash on Wednesday, the Cameroonian will once again watch from the stands on Sunday as Klopp and the boys look to extend their impressive unbeaten streak against Everton. The Toffees are without a win in their last 17 Premier League matches at Anfield — a record Klopp would be more than happy to increase.

“I saw the Merseyside derby at Everton, the 1-1 draw before I came to Liverpool. I think it was the week before I signed as the manager,” said the Reds boss. “I didn’t have a lot of expectations, to be honest. I didn’t think a lot about it, but it’s a derby at its best and I like it. So far, how I realised it, there’s a lot of respect between the two clubs and I really like that, to be honest,” mused Klopp. “In the game, yes there’s still respect but try everything to win it, try everything, but around the games we live in one city and there’s enough space obviously for supporters of both clubs.”