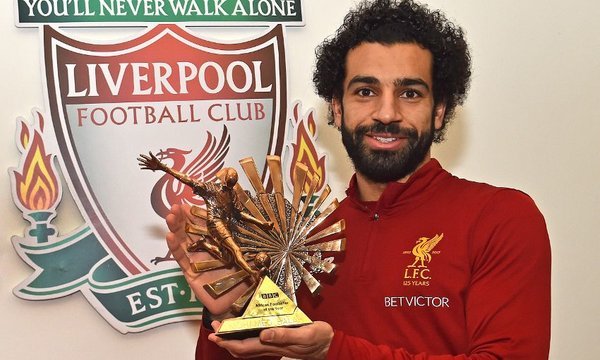 “I’m very happy to win this award, it’s a special feeling for me,” said the Egyptian. “I’d like to thank everybody; my teammates and the people I work with. I am very happy here at the club, I’ve had a very good start here. Also the manager has helped me to settle into the team,” enthused Salah, full of praise for Liverpool manager Jurgen Klopp. “Last season I had a very good season with Roma, so I need to thank my teammates [there] and also my teammates in the national team,” added the winger, staying humble. “[Now] I’d also like to win it next year!”

Building on a fantastic season in Serie A, the 25-year old has been a revelation since making the move to Anfield over the summer. A stunning strike in Sunday’s Merseyside Derby brought the Egyptian’s goal tally for the campaign to a staggering 19 with 13 of those coming in the Premier League. Salah has been a massive player for Liverpool in Europe as well, scoring five goals and adding one assist as the Reds marched in to the last 16 of the Champions League where they’ll face Portuguese giants FC Porto.

His impact hasn’t been limited to club football though — the Egyptian was the key man for his country as the Pharaohs secured a place in next summers World Cup.

“It’s a fantastic prize for a pretty good player!” exclaimed Liverpool boss Jurgen Klopp with his trademark laugh. “I am a really lucky person because I’ve had the opportunity to work with a few fantastic, outstandingly good players – and now I am happy I have it with Mo,” added the German. “The good thing with him is he is still young, there is a lot of space for improvement and still a lot of potential for us to work on, but that’s how it should be.”