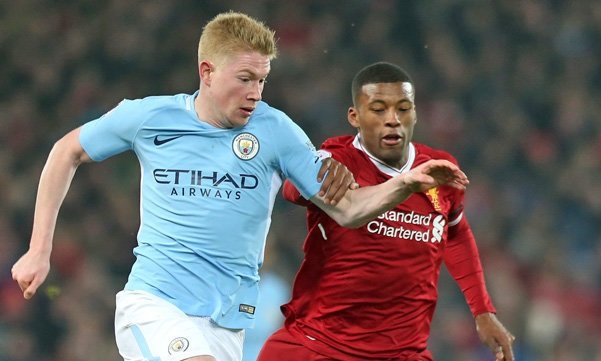 Liverpool may have handed Manchester City their first defeat of the season in a rousing 4-3 win at Anfield on the on the weekend, but the 12-point gulf between the Citizens and their closest chasers means that the Premier League title race is still very much theirs to lose.

The Reds, who took a big step towards solidifying their place in the top-four, stretched their own unbeaten streak to an impressive 18-matches in all competitions, but the battle for a spot in next season’s Champions League is likely to go down to the wire — which means they’re going to have to keep their focus and maintain this standard to keep pace.

“It was a difficult game. We did a lot of things right; we scored four goals and unfortunately we conceded three, but we are happy to give them their first defeat of the season,” said Liverpool midfielder Georginio Wijnaldum. “Every game is a new game. We have showed that we can beat Manchester City, a good team – one of the best in the league,” enthused the Dutchman. “But we have to put in that performance every week. That’s the biggest challenge we have. I don’t want to say ‘it says this about us’ because every game is a new game and we have to perform.”

While it’s likely to be an altogether different kind of match when they square up with Swansea City on Monday, the meeting with the Citizens highlighted both their impressive abilities going forward and their need to keep things tight at the back. Scoring three goals in an eight minute blitz to make it 4-1, they went on to concede two within a matter of moments to set up a nervy finish.

“I’m sure the coaches and the manager will put things together and we’ll see what we could have done better for the last two goals,” explained Reds fullback Andy Robertson, who put in a Man of the Match worthy performance. “They were probably sloppy on our part but it was all about getting the three points today whether it was 1-0 or 4-3, we’re absolutely delighted with it,” added the Scotsman, looking ahead to the meeting with the Swans. “Once it all calms down I’m sure we’ll get the analysis out and see what we could do better for all three goals and if we look at that we can try and cut out the mistakes.”