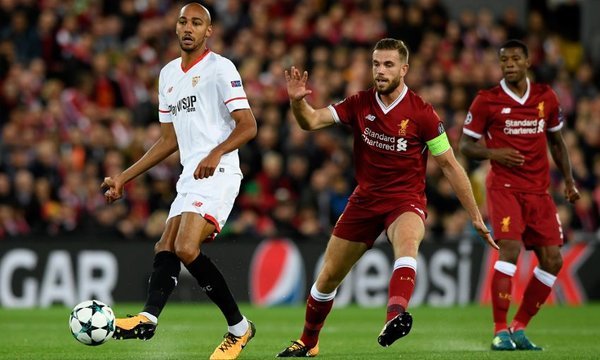 Paying for their wastefulness in front of the net, Liverpool threw away two points in their Champions League curtain raiser as Sevilla scored with both of their attempts on target to scrape at draw at Anfield.

“We could have taken three points with the chances we created in both halves. They have got us twice on a little bit of a counter-attack,” explained Reds captain Jordan Henderson, speaking to BT Sports after the match. “We’re disappointed not to take three points,” conceded the skipper, knowing full well that a difficult job just got that much tougher. “But I thought the lads reacted well after the weekend, put in a good shift and going forward we looked exciting and could have scored a few more goals.”

Considering the usual potency of their attack and that they took almost 20 more shots than their visitors, Henderson is spot on right there. Oddly wasteful in front of the net, the Anfield outfit failed to wrack up the numbers and predictably paid the price with their habit of conceding late coming back to haunt them.

Before their defensive shambles took center stage and spoiled the evening, there was an odd bit of drama mid-way through the second half when Sevilla boss Eduardo Berizzo was sent to the stands for his second time wasting infraction after throwing the ball away from Liverpool defender Joe Gomez — who would also end the night early after picking up a late yellow card. While the Argentine would come up with a bizarre explanation for his antics, the Spaniard’s bench were pointing their fingers at his counter-part in Jurgen Klopp, claiming he was responsible for the ref’s decision.

“The coach was no problem, but I do not think I had any decision on the referee,” explained the German manager, dismissing suggestions that he had any influence over the decision to send Berizzo to the stands. “I did not ask for it,” stressed Klopp, protesting his innocence. “The people on their bench thought I was responsible for his red card and did not like me too much.”