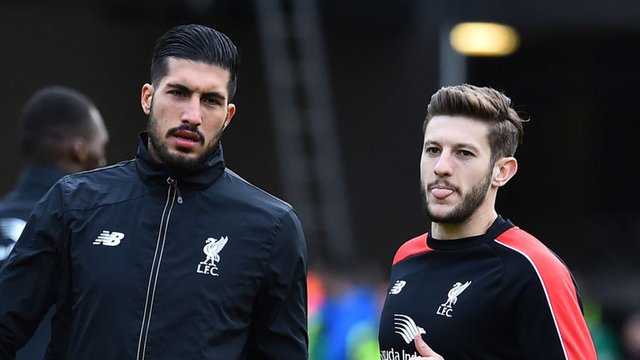 Going from a perfect first half to a dire second, Liverpool ran through the entire spectrum of emotions as they squandered a three goal lead to draw with Sevilla in the Champions League on Tuesday. With no time to regroup and reflect, Reds boss Jurgen Klopp has to make some decisions about his midfield as Chelsea roll in to town at the weekend.

“Emre struggles a little bit. A strange situation in the game, a little muscle [issue]. It could be close – he is a doubt, let me say it like this,” said Reds boss Jurgen Klopp, addressing the press ahead of the showdown with the Blues. “Adam is on his way, no doubt about that,” confirmed the German, taking care not to set the expectations too high. “We have to see how we will handle this in the next few days and weeks.”

While Liverpool were giving up three in Spain, Chelsea were wracking up the goals in Azerbaijan — putting four past Qarabag FK to run out comfortable winners at the Baku National Stadium. With their spot already assured in the knock-out stages of the Champions League, Antonio Conte’s side will make the trip to Merseyside a little worse for wear on account of their travels, but confident in their chances of getting a result.

If nothing else, they’ll know that they’re able to score goals. Having run roughshod over their hosts during the opening 45-minutes, the Reds were unable to cope when Sevilla switched tactics at the break, overloading the wide areas and neutralizing the middle. Klopp’s missing midfield aside, after a period of relative quiet in defense, the Andalusians gave us a stark reminder of how bad we are at the back. While there’s no chance he’s going to fix all our problems, after missing out against Southampton last weekend and in Europe on Tuesday, Joel Matip could return on Saturday after rejoining full training earlier this week.

“Joel trained yesterday for the first time with the team and, again, we have to to see as well. “But both give good signs – nothing else to say about that in the moment,” stressed Klopp, not wanting to push the issue. “I don’t want to talk about this here,” added the Reds boss when the topic of Lallana facing Chelsea came back around. “If I have anything to say about that I will talk to the player first. We will see.”