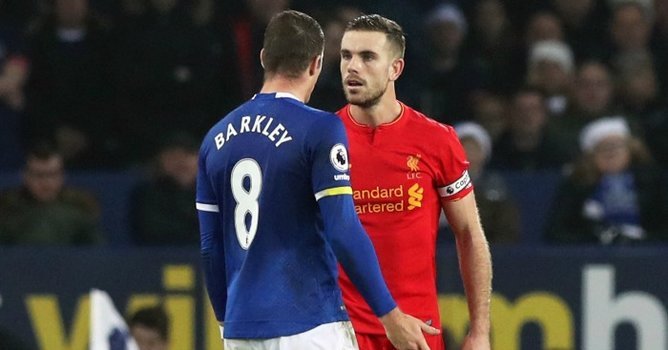 Tipped to return to the starting eleven when they square up to cross-town rivals Everton on Sunday, Liverpool captain Jordan Henderson has admitted that although he was disappointed to have been left out of the do-or-die clash with Spartak Moscow in the Champions League on Wednesday, he understands what the manager is trying to do.

“I think every player is always going to be disappointed when they don’t play, especially in big games, but with the squad we’ve got, the amount of big players we’ve got, some players are not going to be playing in games all the time,” explained the Reds skipper. “You look at the Chelsea game, Sadio Mane didn’t start the game. It’s going to be a pattern throughout the next few weeks, because there are a lot of games coming up,” mused Henderson. “Just because I am captain, it doesn’t mean I have to start every game,” added the Sunderland born midfielder. “Obviously it might have been different when Carra (Jamie Carragher) and Stevie (Steven Gerrard) were here because it was different, but at the end of the day, if I’m not playing or I’m looking tired, I’m not going to play.”

With the hectic run of festive fixtures just over the horizon — including two derbies and a trip to Arsenal sandwiched between — Liverpool boss Jurgen Klopp has already started managing the fitness of his players. Rotating wherever possible, we’ve most notably seen the “Fab Four” of Sadio Mane, Roberto Firmino, Mohamed Salah and Philippe Coutinho rotate in and out of the side.

Injuries to the likes of Joel Matip and Adam Lallana has prevented too many changes in other parts of the park, but the fact of the matter is that the “heavy metal football” employed by the Reds takes it toll on everyone — captain or not.

“I’m not sure if it’s English or old-fashioned or whatever but even a captain cannot play all the time. You can’t bring him just because of the armband,” stressed Klopp. “You need players on the pitch to be 100 per cent for the derby. I made the decision for last week and I only spoke about it because I knew people will find out and make a s*** story out of it,” added the Reds boss, laughing off any suggestions of Henderson losing his place. “Being the skipper of Liverpool is the hardest job in world football because the man that came before him is Steven Gerrard.”

One thought on “Henderson Accepts His Place Isn’t Guaranteed, Klopp Laughs Off Made Up Stories”