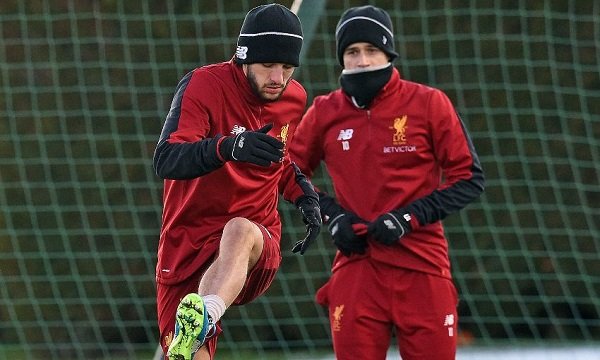 Hot off the heels of the draw with Everton on Sunday, Liverpool square up with struggling West Bromwich Albion at Anfield and even though he got some heat for making a number of changes in the Derby, Reds boss Jurgen Klopp will almost certainly be forced to switch things up tomorrow — though it remains unlikely that Adam Lallana will be risked against the Baggies.

“Adam is back in training completely normally but of course he needs to build up again. That’s how it is,” explained the German manager in his pre-match presser. “But he is good. He trains completely normally. We have to see what we do with him because we need him for the next few weeks, 100 per cent,” continued Klopp, hinting that a return to action is on the way for the midfielder. “We should not need him for tomorrow but then, step by step, we need to see how we can bring him in match fitness shape. That’s it. We have to see, but he is in a good way.”

Having made six changes to the side that battered Brighton and Hove Albion the previous weekend, the manager started the meeting with the Toffees with influential duo Roberto Firmino and Philippe Coutinho as well as Emre Can on the bench. Midweek exertions in the Champions League and the deluge of festive fixtures means that the fitness of the players needs to be managed, but after dominating the match throughout the 90-minutes, the eventual draw with Everton felt more like a loss at the final whistle.

With that being said, the Reds remain in a good place and roll in to the start of the holiday season unbeaten in their past six Premier League outings and holding on to their spot in the top four. While Klopp is sure to make adjustments further up the field, it’s unlikely we’ll see too much movement at the back with both Alberto Moreno and Joel Matip still sidelined through injury.

“Not really, no. He’s not ready for sure – no chance. We will make further assessments in the moment, we will send him to different doctors just to know a little bit more,” said the Reds boss when asked if there was any new news regarding Moreno’s ankle problem. “It’s still possible it’s not that long, it’s possible it is up to six weeks. We will have to see,” added Klopp before shifting gears to Matip. “Joel is not in training. He is running, nothing more. That means it takes a little bit longer.”