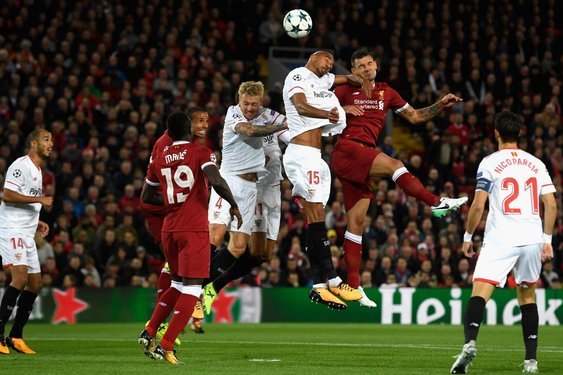 Unusually wasteful in front of the net, Liverpool’s habit of conceding late came back to haunt them as Sevilla midfielder Joaquin Correa snatched a share of the points for the Spaniards in their opening match of the Champions League Group Stage.

“I know here, you’re always looking for this thing, so the defence was always something we were talking about — [we] didn’t sign this or that and all that stuff,” explained Reds boss Jurgen Klopp, hinting at their summer long pursuit of Southampton captain Virgil van Dijk. “But, if these problems would have been sorted with one player, you could imagine we would put all our money in and say: ‘Come on, let’s do this.’,” continued the German manager. “It’s not about this, it’s kind of this being dominant and losing a little bit the grip on the game,” added Klopp. “That’s all space for improvement for all of us.”

Improvement has been the watch word when talking about Liverpool’s back-line over the last couple of years, but tangible examples of it under Klopp aren’t easy to find.

The German’s decision to start back-up ‘keeper Loris Karius instead of incumbent number one Simon Mignolet didn’t seem to make much of a difference, but a recall to the starting eleven for Dejan Lovren after the Croatian was rested during the embarrassing outing away to Manchester City at the weekend resulted in the error-prone defender gifting the visitors their first goal.

Cranking up the pressure, Roberto Firmino would pull the Reds level and Mohamed Salah would push them ahead, but an inability to capitalize on their chances meant that Correa’s late equalizer — which came out of nowhere — was just enough to earn the Andalusian’s a share of the spoils.

“We need to learn to be dominant and not to give easy goals away and the first one was, for sure, not necessary and too easy,” fumed Klopp, obviously disappointed. “The second, I have absolutely no clue how they came through that, to be honest, I have to see that again. It’s not a general defending problem but we have to improve, 100 percent,” said the Reds manager, going on to add, “There is a lot from this game on which we can build and that’s what we will try, of course.”